Before we spend countless hours researching a company, we like to analyze what insiders, hedge funds and billionaire investors think of the stock first. This is a necessary first step in our investment process because our research has shown that the elite investors’ consensus returns have been exceptional. In the following paragraphs, we find out what the billionaire investors and hedge funds think of Perficient, Inc. (NASDAQ:PRFT).

Perficient, Inc. (NASDAQ:PRFT) shares haven’t seen a lot of action during the second quarter. Overall, hedge fund sentiment was unchanged. The stock was in 16 hedge funds’ portfolios at the end of the second quarter of 2019. The level and the change in hedge fund popularity aren’t the only variables you need to analyze to decipher hedge funds’ perspectives. A stock may witness a boost in popularity but it may still be less popular than similarly priced stocks. That’s why at the end of this article we will examine companies such as Geopark Limited (NYSE:GPRK), G1 Therapeutics, Inc. (NASDAQ:GTHX), and New Mountain Finance Corporation (NYSE:NMFC) to gather more data points. Our calculations also showed that PRFT isn’t among the 30 most popular stocks among hedge funds (see the video below). 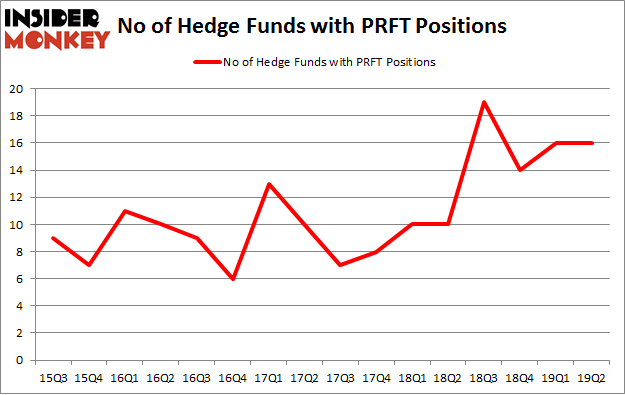 Judging by the fact that Perficient, Inc. (NASDAQ:PRFT) has faced falling interest from the aggregate hedge fund industry, logic holds that there were a few hedgies that decided to sell off their entire stakes in the second quarter. It’s worth mentioning that Paul Marshall and Ian Wace’s Marshall Wace LLP said goodbye to the largest investment of the 750 funds followed by Insider Monkey, worth about $3.5 million in call options. Matthew Hulsizer’s fund, PEAK6 Capital Management, also sold off its call options, about $1.4 million worth. These bearish behaviors are interesting, as total hedge fund interest stayed the same (this is a bearish signal in our experience).

As you can see these stocks had an average of 10.25 hedge funds with bullish positions and the average amount invested in these stocks was $67 million. That figure was $51 million in PRFT’s case. New Mountain Finance Corporation (NYSE:NMFC) is the most popular stock in this table. On the other hand Geopark Limited (NYSE:GPRK) is the least popular one with only 10 bullish hedge fund positions. Compared to these stocks Perficient, Inc. (NASDAQ:PRFT) is more popular among hedge funds. Our calculations showed that top 20 most popular stocks among hedge funds returned 24.4% in 2019 through September 30th and outperformed the S&P 500 ETF (SPY) by 4 percentage points. Hedge funds were also right about betting on PRFT as the stock returned 12.4% during Q3 and outperformed the market by an even larger margin. Hedge funds were clearly right about piling into this stock relative to other stocks with similar market capitalizations.