The fourth quarter was a rough one for most investors, as fears of a rising interest rate environment in the U.S, a trade war with China, and a more or less stagnant Europe, weighed heavily on the minds of investors. Both the S&P 500 and Russell 2000 sank as a result, with the Russell 2000, which is composed of smaller companies, being hit especially hard. This was primarily due to hedge funds, which are big supporters of small-cap stocks, pulling some of their capital out of the volatile markets during this time. Let’s look at how this market volatility affected the sentiment of hedge funds towards PennyMac Mortgage Investment Trust (NYSE:PMT), and what that likely means for the prospects of the company and its stock.

Is PennyMac Mortgage Investment Trust (NYSE:PMT) the right pick for your portfolio? The smart money is in an optimistic mood. The number of long hedge fund bets rose by 4 lately. Our calculations also showed that PMT isn’t among the 30 most popular stocks among hedge funds.

What does the smart money think about PennyMac Mortgage Investment Trust (NYSE:PMT)?

At Q4’s end, a total of 11 of the hedge funds tracked by Insider Monkey were long this stock, a change of 57% from the previous quarter. The graph below displays the number of hedge funds with bullish position in PMT over the last 14 quarters. With hedgies’ positions undergoing their usual ebb and flow, there exists a select group of key hedge fund managers who were increasing their stakes considerably (or already accumulated large positions). 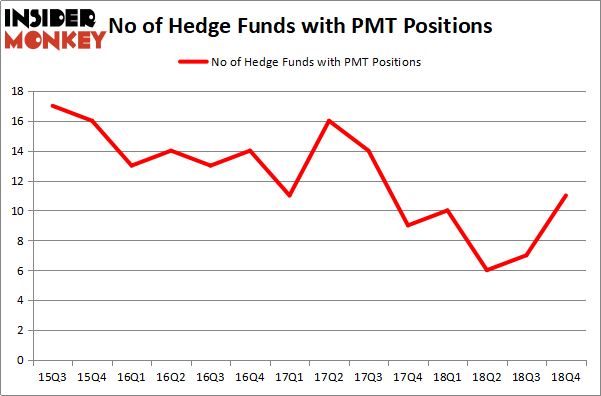 The largest stake in PennyMac Mortgage Investment Trust (NYSE:PMT) was held by Citadel Investment Group, which reported holding $7.3 million worth of stock at the end of December. It was followed by Renaissance Technologies with a $6.1 million position. Other investors bullish on the company included Millennium Management, Winton Capital Management, and Holocene Advisors.

As one would reasonably expect, some big names have been driving this bullishness. Millennium Management, managed by Israel Englander, assembled the most outsized position in PennyMac Mortgage Investment Trust (NYSE:PMT). Millennium Management had $1.2 million invested in the company at the end of the quarter. Dmitry Balyasny’s Balyasny Asset Management also initiated a $0.4 million position during the quarter. The other funds with brand new PMT positions are Benjamin A. Smith’s Laurion Capital Management, Bruce Kovner’s Caxton Associates LP, and David Costen Haley’s HBK Investments.

As you can see these stocks had an average of 9 hedge funds with bullish positions and the average amount invested in these stocks was $52 million. That figure was $19 million in PMT’s case. Ambarella Inc (NASDAQ:AMBA) is the most popular stock in this table. On the other hand Myovant Sciences Ltd. (NYSE:MYOV) is the least popular one with only 5 bullish hedge fund positions. PennyMac Mortgage Investment Trust (NYSE:PMT) is not the most popular stock in this group but hedge fund interest is still above average. This is a slightly positive signal but we’d rather spend our time researching stocks that hedge funds are piling on. Our calculations showed that top 15 most popular stocks) among hedge funds returned 24.2% through April 22nd and outperformed the S&P 500 ETF (SPY) by more than 7 percentage points. Unfortunately PMT wasn’t nearly as popular as these 15 stock and hedge funds that were betting on PMT were disappointed as the stock returned 14.3% and underperformed the market. If you are interested in investing in large cap stocks with huge upside potential, you should check out the top 15 most popular stocks) among hedge funds as 13 of these stocks already outperformed the market this year.