Park National Corporation (NYSEAMEX:PRK) shareholders have witnessed a decrease in support from the world’s most elite money managers recently. Our calculations also showed that PRK isn’t among the 30 most popular stocks among hedge funds.

How have hedgies been trading Park National Corporation (NYSEAMEX:PRK)? 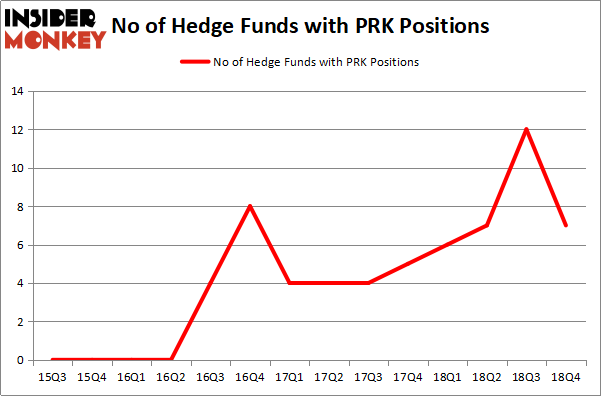 The largest stake in Park National Corporation (NYSEAMEX:PRK) was held by Renaissance Technologies, which reported holding $9.3 million worth of stock at the end of December. It was followed by Citadel Investment Group with a $1 million position. Other investors bullish on the company included Blue Mountain Capital, AQR Capital Management, and Holocene Advisors.

Seeing as Park National Corporation (NYSEAMEX:PRK) has faced falling interest from the entirety of the hedge funds we track, we can see that there were a few hedge funds that slashed their entire stakes heading into Q3. Interestingly, Israel Englander’s Millennium Management said goodbye to the largest stake of the 700 funds tracked by Insider Monkey, valued at close to $2.7 million in stock. Paul Marshall and Ian Wace’s fund, Marshall Wace LLP, also sold off its stock, about $2.3 million worth. These transactions are important to note, as total hedge fund interest dropped by 5 funds heading into Q3.

Let’s go over hedge fund activity in other stocks – not necessarily in the same industry as Park National Corporation (NYSEAMEX:PRK) but similarly valued. We will take a look at QEP Resources Inc (NYSE:QEP), Chesapeake Utilities Corporation (NYSE:CPK), Revlon Inc (NYSE:REV), and Ebix Inc (NASDAQ:EBIX). This group of stocks’ market values are similar to PRK’s market value.

As you can see these stocks had an average of 19.75 hedge funds with bullish positions and the average amount invested in these stocks was $142 million. That figure was $13 million in PRK’s case. Revlon Inc (NYSE:REV) is the most popular stock in this table. On the other hand Chesapeake Utilities Corporation (NYSE:CPK) is the least popular one with only 10 bullish hedge fund positions. Compared to these stocks Park National Corporation (NYSEAMEX:PRK) is even less popular than CPK. Hedge funds dodged a bullet by taking a bearish stance towards PRK. Our calculations showed that the top 15 most popular hedge fund stocks returned 24.2% through April 22nd and outperformed the S&P 500 ETF (SPY) by more than 7 percentage points. Unfortunately PRK wasn’t nearly as popular as these 15 stock (hedge fund sentiment was very bearish); PRK investors were disappointed as the stock returned 11.1% and underperformed the market. If you are interested in investing in large cap stocks with huge upside potential, you should check out the top 15 most popular stocks) among hedge funds as 13 of these stocks already outperformed the market this year.