Legendary investors such as Jeffrey Talpins and Seth Klarman earn enormous amounts of money for themselves and their investors by doing in-depth research on small-cap stocks that big brokerage houses don’t publish. Small cap stocks -especially when they are screened well- can generate substantial outperformance versus a boring index fund. That’s why we analyze the activity of those elite funds in these small-cap stocks. In the following paragraphs, we analyze Owens Corning (NYSE:OC) from the perspective of those elite funds.

Owens Corning (NYSE:OC) investors should be aware of a decrease in enthusiasm from smart money in recent months. OC was in 27 hedge funds’ portfolios at the end of March. There were 40 hedge funds in our database with OC holdings at the end of the previous quarter. Our calculations also showed that OC isn’t among the 30 most popular stocks among hedge funds.

According to most market participants, hedge funds are perceived as underperforming, old financial vehicles of years past. While there are greater than 8000 funds with their doors open at present, Our researchers choose to focus on the bigwigs of this group, approximately 750 funds. These investment experts control the majority of the smart money’s total capital, and by following their matchless stock picks, Insider Monkey has spotted a few investment strategies that have historically outperformed the broader indices. Insider Monkey’s flagship hedge fund strategy beat the S&P 500 index by around 5 percentage points per annum since its inception in May 2014 through the end of May. We were able to generate large returns even by identifying short candidates. Our portfolio of short stocks lost 30.9% since February 2017 (through May 30th) even though the market was up nearly 24% during the same period. We just shared a list of 5 short targets in our latest quarterly update and they are already down an average of 11.9% in less than a couple of weeks whereas our long picks outperformed the market by 2 percentage points in this volatile 2 week period. 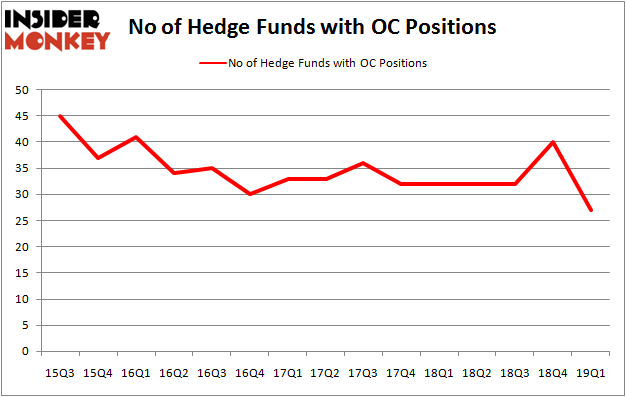 The largest stake in Owens Corning (NYSE:OC) was held by Adage Capital Management, which reported holding $198.8 million worth of stock at the end of March. It was followed by Long Pond Capital with a $151.2 million position. Other investors bullish on the company included D1 Capital Partners, Maverick Capital, and Citadel Investment Group.

Seeing as Owens Corning (NYSE:OC) has faced falling interest from the smart money, it’s safe to say that there exists a select few funds who sold off their positions entirely in the third quarter. Interestingly, Paul Reeder and Edward Shapiro’s PAR Capital Management cut the biggest stake of the “upper crust” of funds tracked by Insider Monkey, comprising an estimated $70.5 million in stock. Matt Simon (Citadel)’s fund, Ashler Capital, also cut its stock, about $19.3 million worth. These transactions are intriguing to say the least, as total hedge fund interest dropped by 13 funds in the third quarter.

As you can see these stocks had an average of 20.25 hedge funds with bullish positions and the average amount invested in these stocks was $309 million. That figure was $932 million in OC’s case. GW Pharmaceuticals plc (NASDAQ:GWPH) is the most popular stock in this table. On the other hand Polaris Industries Inc. (NYSE:PII) is the least popular one with only 16 bullish hedge fund positions. Compared to these stocks Owens Corning (NYSE:OC) is more popular among hedge funds. Our calculations showed that top 20 most popular stocks among hedge funds returned 1.9% in Q2 through May 30th and outperformed the S&P 500 ETF (SPY) by more than 3 percentage points. Hedge funds were also right about betting on OC as the stock returned 4% during the same period and outperformed the market by an even larger margin. Hedge funds were clearly right about piling into this stock relative to other stocks with similar market capitalizations.