Here’s What Hedge Funds Think About ONE Gas Inc (OGS)

Insider Monkey finished processing more than 700 13F filings submitted by hedge funds and prominent investors. These filings show these funds’ portfolio positions as of December 31st, 2018. In this article we are going to take a look at smart money sentiment towards ONE Gas Inc (NYSE:OGS).

ONE Gas Inc (NYSE:OGS) was in 17 hedge funds’ portfolios at the end of December. OGS has seen an increase in hedge fund interest in recent months. There were 15 hedge funds in our database with OGS positions at the end of the previous quarter. Our calculations also showed that OGS isn’t among the 30 most popular stocks among hedge funds.

What does the smart money think about ONE Gas Inc (NYSE:OGS)?

Heading into the first quarter of 2019, a total of 17 of the hedge funds tracked by Insider Monkey held long positions in this stock, a change of 13% from one quarter earlier. The graph below displays the number of hedge funds with bullish position in OGS over the last 14 quarters. So, let’s find out which hedge funds were among the top holders of the stock and which hedge funds were making big moves. 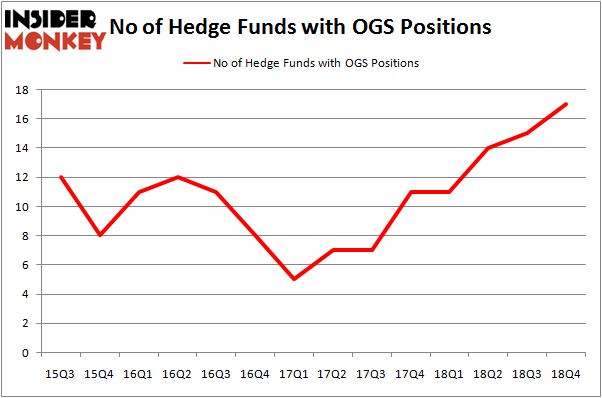 Among these funds, Winton Capital Management held the most valuable stake in ONE Gas Inc (NYSE:OGS), which was worth $20.2 million at the end of the third quarter. On the second spot was Impax Asset Management which amassed $14.8 million worth of shares. Moreover, Arrowstreet Capital, GLG Partners, and AQR Capital Management were also bullish on ONE Gas Inc (NYSE:OGS), allocating a large percentage of their portfolios to this stock.

Now, some big names have jumped into ONE Gas Inc (NYSE:OGS) headfirst. BlueCrest Capital Mgmt., managed by Michael Platt and William Reeves, established the most valuable position in ONE Gas Inc (NYSE:OGS). BlueCrest Capital Mgmt. had $1.4 million invested in the company at the end of the quarter. Brandon Haley’s Holocene Advisors also initiated a $0.7 million position during the quarter. The other funds with new positions in the stock are David Costen Haley’s HBK Investments and Benjamin A. Smith’s Laurion Capital Management.

As you can see these stocks had an average of 26 hedge funds with bullish positions and the average amount invested in these stocks was $380 million. That figure was $80 million in OGS’s case. Western Alliance Bancorporation (NYSE:WAL) is the most popular stock in this table. On the other hand MAXIMUS, Inc. (NYSE:MMS) is the least popular one with only 22 bullish hedge fund positions. Compared to these stocks ONE Gas Inc (NYSE:OGS) is even less popular than MMS. Hedge funds dodged a bullet by taking a bearish stance towards OGS. Our calculations showed that the top 15 most popular hedge fund stocks returned 24.2% through April 22nd and outperformed the S&P 500 ETF (SPY) by more than 7 percentage points. Unfortunately OGS wasn’t nearly as popular as these 15 stock (hedge fund sentiment was very bearish); OGS investors were disappointed as the stock returned 8.8% and underperformed the market. If you are interested in investing in large cap stocks with huge upside potential, you should check out the top 15 most popular stocks) among hedge funds as 13 of these stocks already outperformed the market this year.