We know that hedge funds generate strong, risk-adjusted returns over the long run, therefore imitating the picks that they are collectively bullish on can be a profitable strategy for retail investors. With billions of dollars in assets, smart money investors have to conduct complex analyses, spend many resources and use tools that are not always available for the general crowd. This doesn’t mean that they don’t have occasional colossal losses; they do (like Peltz’s recent General Electric losses). However, it is still a good idea to keep an eye on hedge fund activity. With this in mind, as the current round of 13F filings has just ended, let’s examine the smart money sentiment towards Old Republic International Corporation (NYSE:ORI).

Old Republic International Corporation (NYSE:ORI) was in 23 hedge funds’ portfolios at the end of December. ORI investors should pay attention to an increase in activity from the world’s largest hedge funds lately. There were 20 hedge funds in our database with ORI positions at the end of the previous quarter. Our calculations also showed that ORI isn’t among the 30 most popular stocks among hedge funds.

At Q4’s end, a total of 23 of the hedge funds tracked by Insider Monkey were bullish on this stock, a change of 15% from one quarter earlier. On the other hand, there were a total of 25 hedge funds with a bullish position in ORI a year ago. With hedge funds’ sentiment swirling, there exists an “upper tier” of key hedge fund managers who were adding to their stakes substantially (or already accumulated large positions). 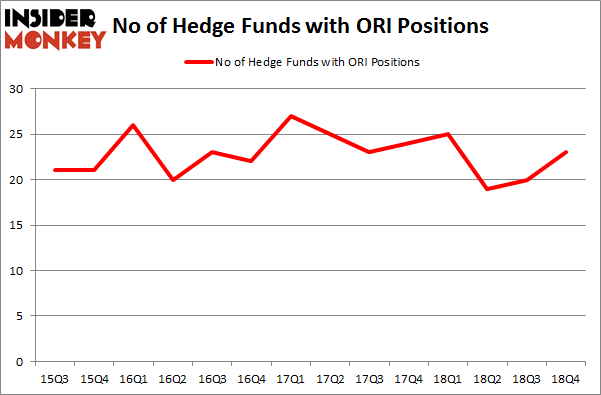 Of the funds tracked by Insider Monkey, Renaissance Technologies, managed by Jim Simons, holds the most valuable position in Old Republic International Corporation (NYSE:ORI). Renaissance Technologies has a $190.9 million position in the stock, comprising 0.2% of its 13F portfolio. Sitting at the No. 2 spot is AQR Capital Management, led by Cliff Asness, holding a $67.7 million position; 0.1% of its 13F portfolio is allocated to the company. Other professional money managers that hold long positions consist of Ken Griffin’s Citadel Investment Group, John Overdeck and David Siegel’s Two Sigma Advisors and Israel Englander’s Millennium Management.

As industrywide interest jumped, key money managers have been driving this bullishness. Stevens Capital Management, managed by Matthew Tewksbury, established the largest position in Old Republic International Corporation (NYSE:ORI). Stevens Capital Management had $1.9 million invested in the company at the end of the quarter. Hoon Kim’s Quantinno Capital also made a $0.4 million investment in the stock during the quarter. The other funds with new positions in the stock are Matthew Hulsizer’s PEAK6 Capital Management and Andre F. Perold’s HighVista Strategies.

As you can see these stocks had an average of 21 hedge funds with bullish positions and the average amount invested in these stocks was $401 million. That figure was $410 million in ORI’s case. CDK Global Inc (NASDAQ:CDK) is the most popular stock in this table. On the other hand Kimco Realty Corp (NYSE:KIM) is the least popular one with only 16 bullish hedge fund positions. Old Republic International Corporation (NYSE:ORI) is not the most popular stock in this group but hedge fund interest is still above average. This is a slightly positive signal but we’d rather spend our time researching stocks that hedge funds are piling on. Our calculations showed that top 15 most popular stocks among hedge funds returned 21.3% through April 8th and outperformed the S&P 500 ETF (SPY) by more than 5 percentage points. Unfortunately ORI wasn’t in this group. Hedge funds that bet on ORI were disappointed as the stock returned 3.3% and underperformed the market. If you are interested in investing in large cap stocks, you should check out the top 15 hedge fund stocks as 12 of these outperformed the market.