How do you pick the next stock to invest in? One way would be to spend hours of research browsing through thousands of publicly traded companies. However, an easier way is to look at the stocks that smart money investors are collectively bullish on. Hedge funds and other institutional investors usually invest large amounts of capital and have to conduct due diligence while choosing their next pick. They don’t always get it right, but, on average, their stock picks historically generated strong returns after adjusting for known risk factors. With this in mind, let’s take a look at the recent hedge fund activity surrounding OGE Energy Corp. (NYSE:OGE).

OGE Energy Corp. (NYSE:OGE) investors should pay attention to a decrease in hedge fund sentiment in recent months. Our calculations also showed that OGE isn’t among the 30 most popular stocks among hedge funds.

Today there are tons of metrics market participants have at their disposal to assess publicly traded companies. A pair of the less known metrics are hedge fund and insider trading moves. We have shown that, historically, those who follow the top picks of the elite hedge fund managers can outclass the market by a healthy margin (see the details here).

Heading into the first quarter of 2019, a total of 16 of the hedge funds tracked by Insider Monkey were long this stock, a change of -16% from the second quarter of 2018. By comparison, 19 hedge funds held shares or bullish call options in OGE a year ago. With hedgies’ positions undergoing their usual ebb and flow, there exists a select group of notable hedge fund managers who were adding to their holdings meaningfully (or already accumulated large positions). 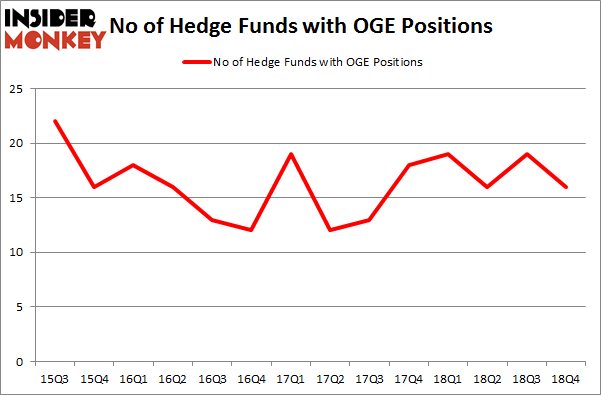 More specifically, Renaissance Technologies was the largest shareholder of OGE Energy Corp. (NYSE:OGE), with a stake worth $92.3 million reported as of the end of September. Trailing Renaissance Technologies was AQR Capital Management, which amassed a stake valued at $69.3 million. Millennium Management, Adage Capital Management, and GLG Partners were also very fond of the stock, giving the stock large weights in their portfolios.

Because OGE Energy Corp. (NYSE:OGE) has experienced falling interest from the aggregate hedge fund industry, logic holds that there exists a select few hedge funds who were dropping their positions entirely by the end of the third quarter. Interestingly, Brian Olson, Baehyun Sung, and Jamie Waters’s Blackstart Capital said goodbye to the largest stake of the “upper crust” of funds watched by Insider Monkey, valued at an estimated $13 million in stock, and Steve Cohen’s Point72 Asset Management was right behind this move, as the fund cut about $4.7 million worth. These transactions are intriguing to say the least, as total hedge fund interest dropped by 3 funds by the end of the third quarter.

Let’s check out hedge fund activity in other stocks – not necessarily in the same industry as OGE Energy Corp. (NYSE:OGE) but similarly valued. We will take a look at RPM International Inc. (NYSE:RPM), Nordstrom, Inc. (NYSE:JWN), Qiagen NV (NYSE:QGEN), and Avery Dennison Corporation (NYSE:AVY). This group of stocks’ market caps are closest to OGE’s market cap.

As you can see these stocks had an average of 23.75 hedge funds with bullish positions and the average amount invested in these stocks was $380 million. That figure was $293 million in OGE’s case. Avery Dennison Corporation (NYSE:AVY) is the most popular stock in this table. On the other hand Qiagen NV (NYSE:QGEN) is the least popular one with only 21 bullish hedge fund positions. Compared to these stocks OGE Energy Corp. (NYSE:OGE) is even less popular than QGEN. Considering that hedge funds aren’t fond of this stock in relation to other companies analyzed in this article, it may be a good idea to analyze it in detail and understand why the smart money isn’t behind this stock. This isn’t necessarily bad news. Although it is possible that hedge funds may think the stock is overpriced and view the stock as a short candidate, they may not be very familiar with the bullish thesis. Our calculations showed that top 15 most popular stocks among hedge funds returned 21.3% through April 8th and outperformed the S&P 500 ETF (SPY) by more than 5 percentage points. Unfortunately OGE wasn’t in this group. Hedge funds that bet on OGE were disappointed as the stock returned 9.4% and underperformed the market. If you are interested in investing in large cap stocks, you should check out the top 15 hedge fund stocks as 12 of these outperformed the market.