How do we determine whether NuVasive, Inc. (NASDAQ:NUVA) makes for a good investment at the moment? We analyze the sentiment of a select group of the very best investors in the world, who spend immense amounts of time and resources studying companies. They may not always be right (no one is), but data shows that their consensus long positions have historically outperformed the market when we adjust for known risk factors.

NuVasive, Inc. (NASDAQ:NUVA) shares haven’t seen a lot of action during the first quarter. Overall, hedge fund sentiment was unchanged. The stock was in 20 hedge funds’ portfolios at the end of the first quarter of 2019. At the end of this article we will also compare NUVA to other stocks including White Mountains Insurance Group Ltd (NYSE:WTM), Rogers Corporation (NYSE:ROG), and AVX Corporation (NYSE:AVX) to get a better sense of its popularity.

What does the smart money think about NuVasive, Inc. (NASDAQ:NUVA)?

At Q1’s end, a total of 20 of the hedge funds tracked by Insider Monkey were long this stock, a change of 0% from one quarter earlier. The graph below displays the number of hedge funds with bullish position in NUVA over the last 15 quarters. With hedgies’ positions undergoing their usual ebb and flow, there exists an “upper tier” of noteworthy hedge fund managers who were increasing their stakes significantly (or already accumulated large positions). 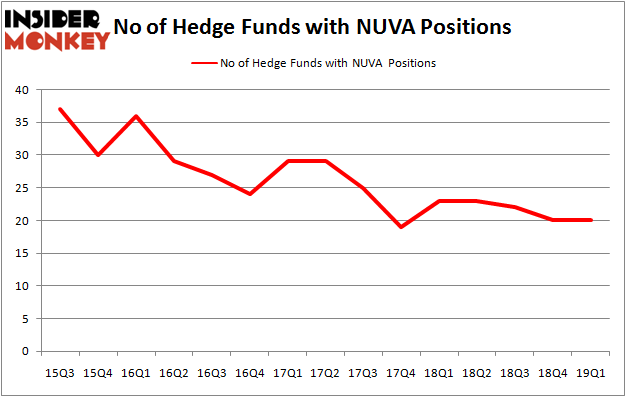 The largest stake in NuVasive, Inc. (NASDAQ:NUVA) was held by Fisher Asset Management, which reported holding $63.1 million worth of stock at the end of March. It was followed by York Capital Management with a $50.2 million position. Other investors bullish on the company included Camber Capital Management, Eversept Partners, and Citadel Investment Group.

Because NuVasive, Inc. (NASDAQ:NUVA) has experienced bearish sentiment from the entirety of the hedge funds we track, logic holds that there was a specific group of hedge funds that slashed their positions entirely last quarter. At the top of the heap, Steve Cohen’s Point72 Asset Management cut the largest investment of the 700 funds watched by Insider Monkey, valued at close to $28.7 million in stock. Justin John Ferayorni’s fund, Tamarack Capital Management, also said goodbye to its stock, about $24.8 million worth. These transactions are intriguing to say the least, as aggregate hedge fund interest stayed the same (this is a bearish signal in our experience).

As you can see these stocks had an average of 16.5 hedge funds with bullish positions and the average amount invested in these stocks was $229 million. That figure was $249 million in NUVA’s case. Conduent Incorporated (NYSE:CNDT) is the most popular stock in this table. On the other hand Rogers Corporation (NYSE:ROG) is the least popular one with only 9 bullish hedge fund positions. NuVasive, Inc. (NASDAQ:NUVA) is not the most popular stock in this group but hedge fund interest is still above average. Our calculations showed that top 20 most popular stocks among hedge funds returned 1.9% in Q2 through May 30th and outperformed the S&P 500 ETF (SPY) by more than 3 percentage points. Hedge funds were also right about betting on NUVA as the stock returned 5.3% during the same period and outperformed the market by an even larger margin. Hedge funds were rewarded for their relative bullishness.