The elite funds run by legendary investors such as David Tepper and Dan Loeb make hundreds of millions of dollars for themselves and their investors by spending enormous resources doing research on small cap stocks that big investment banks don’t follow. Because of their pay structures, they have strong incentives to do the research necessary to beat the market. That’s why we pay close attention to what they think in small cap stocks. In this article, we take a closer look at Northwest Natural Holding Company (NYSE:NWN) from the perspective of those elite funds.

Is Northwest Natural Holding Company (NYSE:NWN) a marvelous stock to buy now? Money managers are getting more bullish. The number of long hedge fund positions went up by 1 recently. Our calculations also showed that NWN isn’t among the 30 most popular stocks among hedge funds. NWN was in 10 hedge funds’ portfolios at the end of the fourth quarter of 2018. There were 9 hedge funds in our database with NWN holdings at the end of the previous quarter. 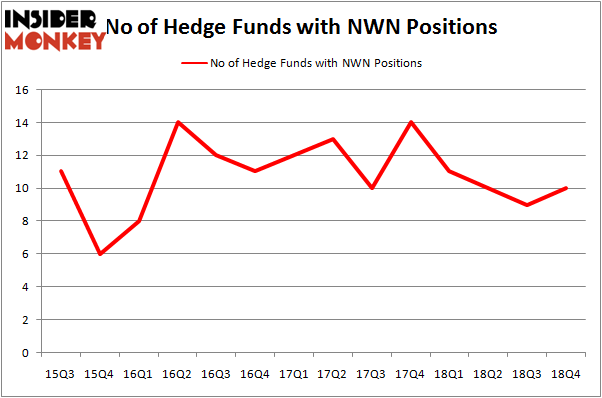 According to publicly available hedge fund and institutional investor holdings data compiled by Insider Monkey, Renaissance Technologies, managed by Jim Simons, holds the number one position in Northwest Natural Holding Company (NYSE:NWN). Renaissance Technologies has a $42.7 million position in the stock, comprising less than 0.1%% of its 13F portfolio. The second most bullish fund manager is Fisher Asset Management, managed by Ken Fisher, which holds a $13.2 million position; the fund has less than 0.1%% of its 13F portfolio invested in the stock. Some other hedge funds and institutional investors that are bullish comprise John Overdeck and David Siegel’s Two Sigma Advisors, Mario Gabelli’s GAMCO Investors and D. E. Shaw’s D E Shaw.

Now, some big names were leading the bulls’ herd. D E Shaw, managed by D. E. Shaw, initiated the biggest position in Northwest Natural Holding Company (NYSE:NWN). D E Shaw had $1.5 million invested in the company at the end of the quarter. Israel Englander’s Millennium Management also made a $0.3 million investment in the stock during the quarter.

As you can see these stocks had an average of 21 hedge funds with bullish positions and the average amount invested in these stocks was $305 million. That figure was $65 million in NWN’s case. Avis Budget Group Inc. (NASDAQ:CAR) is the most popular stock in this table. On the other hand Supernus Pharmaceuticals Inc (NASDAQ:SUPN) is the least popular one with only 15 bullish hedge fund positions. Compared to these stocks Northwest Natural Holding Company (NYSE:NWN) is even less popular than SUPN. Hedge funds dodged a bullet by taking a bearish stance towards NWN. Our calculations showed that the top 15 most popular hedge fund stocks returned 24.2% through April 22nd and outperformed the S&P 500 ETF (SPY) by more than 7 percentage points. Unfortunately NWN wasn’t nearly as popular as these 15 stock (hedge fund sentiment was very bearish); NWN investors were disappointed as the stock returned 7.5% and underperformed the market. If you are interested in investing in large cap stocks with huge upside potential, you should check out the top 15 most popular stocks) among hedge funds as 13 of these stocks already outperformed the market this year.