Is NorthStar Realty Europe Corp. (NYSE:NRE) a buy right now? The smart money is selling. The number of long hedge fund bets were trimmed by 2 in recent months. Our calculations also showed that NRE isn’t among the 30 most popular stocks among hedge funds. NRE was in 13 hedge funds’ portfolios at the end of the fourth quarter of 2018. There were 15 hedge funds in our database with NRE holdings at the end of the previous quarter.

At the end of the fourth quarter, a total of 13 of the hedge funds tracked by Insider Monkey held long positions in this stock, a change of -13% from the second quarter of 2018. Below, you can check out the change in hedge fund sentiment towards NRE over the last 14 quarters. So, let’s find out which hedge funds were among the top holders of the stock and which hedge funds were making big moves. 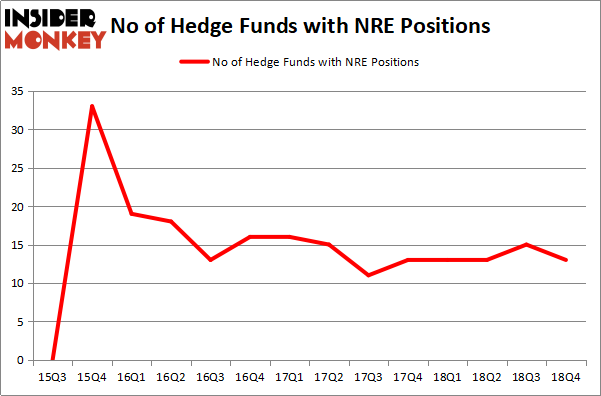 Among these funds, Rima Senvest Management held the most valuable stake in NorthStar Realty Europe Corp. (NYSE:NRE), which was worth $69.2 million at the end of the fourth quarter. On the second spot was Shoals Capital Management which amassed $22 million worth of shares. Moreover, Renaissance Technologies, QVT Financial, and Balyasny Asset Management were also bullish on NorthStar Realty Europe Corp. (NYSE:NRE), allocating a large percentage of their portfolios to this stock.

Due to the fact that NorthStar Realty Europe Corp. (NYSE:NRE) has experienced declining sentiment from the smart money, it’s safe to say that there lies a certain “tier” of funds who were dropping their full holdings in the third quarter. Intriguingly, Peter Rathjens, Bruce Clarke and John Campbell’s Arrowstreet Capital dropped the biggest position of the “upper crust” of funds monitored by Insider Monkey, totaling about $5.7 million in stock. Noam Gottesman’s fund, GLG Partners, also dumped its stock, about $5.7 million worth. These bearish behaviors are important to note, as aggregate hedge fund interest was cut by 2 funds in the third quarter.

As you can see these stocks had an average of 18.5 hedge funds with bullish positions and the average amount invested in these stocks was $195 million. That figure was $108 million in NRE’s case. Resolute Forest Products Inc (NYSE:RFP) is the most popular stock in this table. On the other hand Crinetics Pharmaceuticals, Inc. (NASDAQ:CRNX) is the least popular one with only 7 bullish hedge fund positions. NorthStar Realty Europe Corp. (NYSE:NRE) is not the least popular stock in this group but hedge fund interest is still below average. Our calculations showed that top 15 most popular stocks) among hedge funds returned 24.2% through April 22nd and outperformed the S&P 500 ETF (SPY) by more than 7 percentage points. A small number of hedge funds were also right about betting on NRE, though not to the same extent, as the stock returned 19.7% and outperformed the market as well.