Hedge Funds and other institutional investors have just completed filing their 13Fs with the Securities and Exchange Commission, revealing their equity portfolios as of the end of December. At Insider Monkey, we follow nearly 750 active hedge funds and notable investors and by analyzing their 13F filings, we can determine the stocks that they are collectively bullish on. One of their picks is Northern Oil & Gas, Inc. (NYSE:NOG), so let’s take a closer look at the sentiment that surrounds it in the current quarter.

Is Northern Oil & Gas, Inc. (NYSE:NOG) a splendid investment now? Hedge funds are taking a pessimistic view. The number of bullish hedge fund bets retreated by 1 lately. Our calculations also showed that nog isn’t among the 30 most popular stocks among hedge funds.

How have hedgies been trading Northern Oil & Gas, Inc. (NYSE:NOG)? 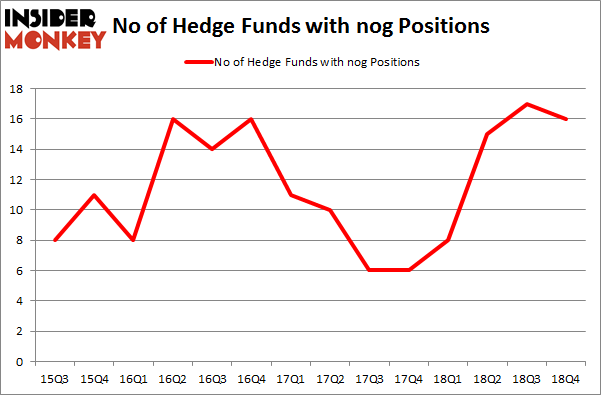 The largest stake in Northern Oil & Gas, Inc. (NYSE:NOG) was held by Citadel Investment Group, which reported holding $31.2 million worth of stock at the end of December. It was followed by Angelo Gordon & Co with a $25.3 million position. Other investors bullish on the company included Millennium Management, Meghalaya Partners, and Oaktree Capital Management.

Judging by the fact that Northern Oil & Gas, Inc. (NYSE:NOG) has experienced bearish sentiment from the smart money, it’s easy to see that there exists a select few fund managers that slashed their entire stakes heading into Q3. Interestingly, Bruce Kovner’s Caxton Associates LP said goodbye to the biggest stake of the 700 funds monitored by Insider Monkey, totaling an estimated $0.2 million in stock. Ben Levine, Andrew Manuel and Stefan Renold’s fund, LMR Partners, also sold off its stock, about $0.2 million worth. These moves are intriguing to say the least, as total hedge fund interest dropped by 1 funds heading into Q3.

As you can see these stocks had an average of 17.25 hedge funds with bullish positions and the average amount invested in these stocks was $130 million. That figure was $103 million in NOG’s case. Momenta Pharmaceuticals, Inc. (NASDAQ:MNTA) is the most popular stock in this table. On the other hand Arbor Realty Trust, Inc. (NYSE:ABR) is the least popular one with only 15 bullish hedge fund positions. Northern Oil & Gas, Inc. (NYSE:NOG) is not the least popular stock in this group but hedge fund interest is still below average. Our calculations showed that top 15 most popular stocks) among hedge funds returned 24.2% through April 22nd and outperformed the S&P 500 ETF (SPY) by more than 7 percentage points. A small number of hedge funds were also right about betting on NOG, though not to the same extent, as the stock returned 20.8% and outperformed the market as well.