As we already know from media reports and hedge fund investor letters, many hedge funds lost money in fourth quarter, blaming macroeconomic conditions and unpredictable events that hit several sectors, with technology among them. Nevertheless, most investors decided to stick to their bullish theses and their long-term focus allows us to profit from the recent declines. In particular, let’s take a look at what hedge funds think about Nine Energy Service, Inc. (NYSE:NINE) in this article.

Is Nine Energy Service, Inc. (NYSE:NINE) a good stock to buy now? Investors who are in the know are getting more bullish. The number of bullish hedge fund bets went up by 3 lately. Our calculations also showed that NINE isn’t among the 30 most popular stocks among hedge funds. NINE was in 10 hedge funds’ portfolios at the end of December. There were 7 hedge funds in our database with NINE positions at the end of the previous quarter.

If you’d ask most investors, hedge funds are assumed to be unimportant, old investment vehicles of yesteryear. While there are more than 8000 funds in operation today, We look at the leaders of this club, around 750 funds. Most estimates calculate that this group of people orchestrate the lion’s share of the smart money’s total capital, and by keeping an eye on their inimitable equity investments, Insider Monkey has come up with a few investment strategies that have historically exceeded Mr. Market. Insider Monkey’s flagship hedge fund strategy exceeded the S&P 500 index by nearly 5 percentage points per annum since its inception in May 2014 through early November 2018. We were able to generate large returns even by identifying short candidates. Our portfolio of short stocks lost 27.5% since February 2017 (through March 12th) even though the market was up nearly 25% during the same period. We just shared a list of 6 short targets in our latest quarterly update and they are already down an average of 6% in less than a month.

How have hedgies been trading Nine Energy Service, Inc. (NYSE:NINE)?

Heading into the first quarter of 2019, a total of 10 of the hedge funds tracked by Insider Monkey held long positions in this stock, a change of 43% from one quarter earlier. The graph below displays the number of hedge funds with bullish position in NINE over the last 14 quarters. With hedgies’ capital changing hands, there exists a select group of key hedge fund managers who were upping their stakes meaningfully (or already accumulated large positions). 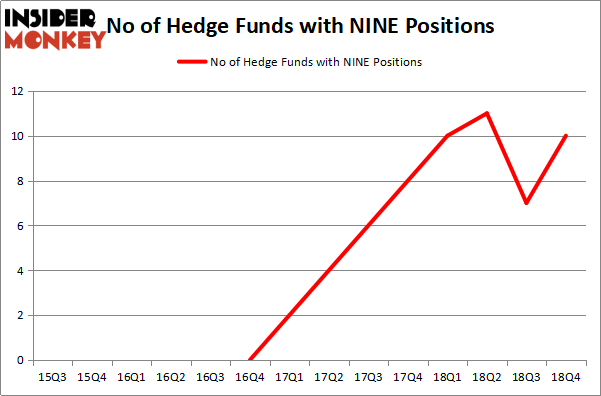 Among these funds, Adage Capital Management held the most valuable stake in Nine Energy Service, Inc. (NYSE:NINE), which was worth $20 million at the end of the fourth quarter. On the second spot was Encompass Capital Advisors which amassed $13.6 million worth of shares. Moreover, D E Shaw, Proxima Capital Management, and Marshall Wace LLP were also bullish on Nine Energy Service, Inc. (NYSE:NINE), allocating a large percentage of their portfolios to this stock.

As you can see these stocks had an average of 12.5 hedge funds with bullish positions and the average amount invested in these stocks was $146 million. That figure was $39 million in NINE’s case. Banc of California, Inc. (NYSE:BANC) is the most popular stock in this table. On the other hand Apollo Medical Holdings, Inc. (NASDAQ:AMEH) is the least popular one with only 3 bullish hedge fund positions. Nine Energy Service, Inc. (NYSE:NINE) is not the least popular stock in this group but hedge fund interest is still below average. This is a slightly negative signal and we’d rather spend our time researching stocks that hedge funds are piling on. Our calculations showed that top 15 most popular stocks) among hedge funds returned 24.2% through April 22nd and outperformed the S&P 500 ETF (SPY) by more than 7 percentage points. Unfortunately NINE wasn’t nearly as popular as these 15 stock (hedge fund sentiment was quite bearish); NINE investors were disappointed as the stock returned -2.4% and underperformed the market. If you are interested in investing in large cap stocks with huge upside potential, you should check out the top 15 most popular stocks) among hedge funds as 13 of these stocks already outperformed the market this year.