Nexa Resources S.A. (NYSE:NEXA) has experienced a decrease in support from the world’s most elite money managers in recent months. Our calculations also showed that NEXA isn’t among the 30 most popular stocks among hedge funds (see the video below).

How have hedgies been trading Nexa Resources S.A. (NYSE:NEXA)?

Heading into the third quarter of 2019, a total of 9 of the hedge funds tracked by Insider Monkey were bullish on this stock, a change of -18% from the first quarter of 2019. Below, you can check out the change in hedge fund sentiment towards NEXA over the last 16 quarters. With hedge funds’ capital changing hands, there exists an “upper tier” of notable hedge fund managers who were upping their stakes substantially (or already accumulated large positions). 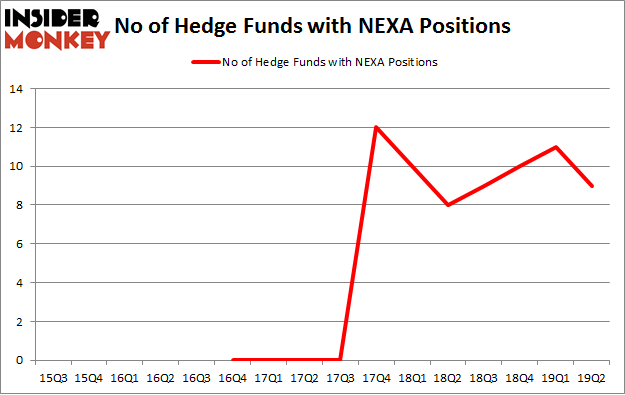 Among these funds, Renaissance Technologies held the most valuable stake in Nexa Resources S.A. (NYSE:NEXA), which was worth $5 million at the end of the second quarter. On the second spot was Balyasny Asset Management which amassed $1.7 million worth of shares. Moreover, GLG Partners, D E Shaw, and Arrowstreet Capital were also bullish on Nexa Resources S.A. (NYSE:NEXA), allocating a large percentage of their portfolios to this stock.

Judging by the fact that Nexa Resources S.A. (NYSE:NEXA) has witnessed a decline in interest from the aggregate hedge fund industry, it’s safe to say that there was a specific group of funds who were dropping their entire stakes heading into Q3. Intriguingly, Paul Marshall and Ian Wace’s Marshall Wace LLP sold off the biggest position of all the hedgies watched by Insider Monkey, comprising about $0.7 million in stock, and Gavin Saitowitz and Cisco J. del Valle’s Springbok Capital was right behind this move, as the fund dropped about $0.1 million worth. These transactions are intriguing to say the least, as total hedge fund interest was cut by 2 funds heading into Q3.

Let’s now take a look at hedge fund activity in other stocks – not necessarily in the same industry as Nexa Resources S.A. (NYSE:NEXA) but similarly valued. We will take a look at Esperion Therapeutics, Inc. (NASDAQ:ESPR), Getty Realty Corp. (NYSE:GTY), ArQule, Inc. (NASDAQ:ARQL), and IMAX Corporation (NYSE:IMAX). This group of stocks’ market values are closest to NEXA’s market value.

As you can see these stocks had an average of 15.75 hedge funds with bullish positions and the average amount invested in these stocks was $187 million. That figure was $10 million in NEXA’s case. ArQule, Inc. (NASDAQ:ARQL) is the most popular stock in this table. On the other hand Getty Realty Corp. (NYSE:GTY) is the least popular one with only 10 bullish hedge fund positions. Compared to these stocks Nexa Resources S.A. (NYSE:NEXA) is even less popular than GTY. Hedge funds dodged a bullet by taking a bearish stance towards NEXA. Our calculations showed that the top 20 most popular hedge fund stocks returned 24.4% in 2019 through September 30th and outperformed the S&P 500 ETF (SPY) by 4 percentage points. Unfortunately NEXA wasn’t nearly as popular as these 20 stocks (hedge fund sentiment was very bearish); NEXA investors were disappointed as the stock returned -1.9% during the third quarter and underperformed the market. If you are interested in investing in large cap stocks with huge upside potential, you should check out the top 20 most popular stocks among hedge funds as many of these stocks already outperformed the market so far in 2019.