Hedge fund interest in The Navigators Group, Inc (NASDAQ:NAVG) shares was flat at the end of last quarter. This is usually a negative indicator. At the end of this article we will also compare NAVG to other stocks including Bottomline Technologies (NASDAQ:EPAY), Whiting Petroleum Corporation (NYSE:WLL), and Tenable Holdings, Inc. (NASDAQ:TENB) to get a better sense of its popularity.

How have hedgies been trading The Navigators Group, Inc (NASDAQ:NAVG)?

Heading into the first quarter of 2019, a total of 17 of the hedge funds tracked by Insider Monkey held long positions in this stock, a change of 0% from one quarter earlier. By comparison, 7 hedge funds held shares or bullish call options in NAVG a year ago. With the smart money’s positions undergoing their usual ebb and flow, there exists a select group of key hedge fund managers who were upping their stakes meaningfully (or already accumulated large positions). 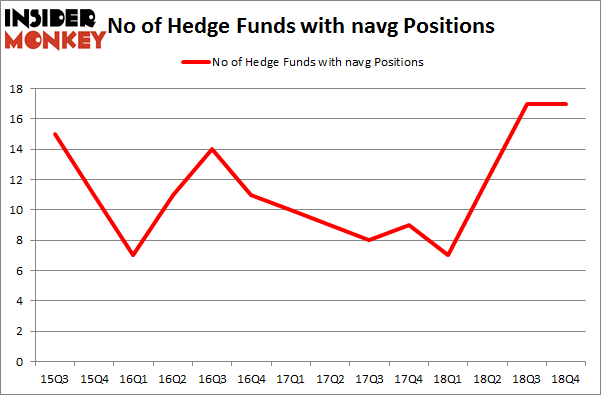 According to publicly available hedge fund and institutional investor holdings data compiled by Insider Monkey, Diamond Hill Capital, managed by Ric Dillon, holds the biggest position in The Navigators Group, Inc (NASDAQ:NAVG). Diamond Hill Capital has a $80.1 million position in the stock, comprising 0.5% of its 13F portfolio. Sitting at the No. 2 spot is Carlson Capital, led by Clint Carlson, holding a $50.4 million position; the fund has 0.8% of its 13F portfolio invested in the stock. Remaining peers that are bullish comprise Jim Simons’s Renaissance Technologies, John Orrico’s Water Island Capital and Gavin Saitowitz and Cisco J. del Valle’s Springbok Capital.

Due to the fact that The Navigators Group, Inc (NASDAQ:NAVG) has experienced declining sentiment from the entirety of the hedge funds we track, we can see that there exists a select few fund managers who sold off their full holdings heading into Q3. At the top of the heap, Paul Marshall and Ian Wace’s Marshall Wace LLP dumped the biggest stake of the 700 funds tracked by Insider Monkey, worth about $8 million in stock. Michael Hintze’s fund, CQS Cayman LP, also cut its stock, about $1.5 million worth. These bearish behaviors are important to note, as aggregate hedge fund interest stayed the same (this is a bearish signal in our experience).

Let’s also examine hedge fund activity in other stocks – not necessarily in the same industry as The Navigators Group, Inc (NASDAQ:NAVG) but similarly valued. We will take a look at Bottomline Technologies (de), Inc. (NASDAQ:EPAY), Whiting Petroleum Corporation (NYSE:WLL), Tenable Holdings, Inc. (NASDAQ:TENB), and II-VI, Inc. (NASDAQ:IIVI). All of these stocks’ market caps are similar to NAVG’s market cap.

As you can see these stocks had an average of 21.75 hedge funds with bullish positions and the average amount invested in these stocks was $155 million. That figure was $243 million in NAVG’s case. Whiting Petroleum Corporation (NYSE:WLL) is the most popular stock in this table. On the other hand Tenable Holdings, Inc. (NASDAQ:TENB) is the least popular one with only 15 bullish hedge fund positions. The Navigators Group, Inc (NASDAQ:NAVG) is not the least popular stock in this group but hedge fund interest is still below average. This is a slightly negative signal and we’d rather spend our time researching stocks that hedge funds are piling on. Our calculations showed that top 15 most popular stocks) among hedge funds returned 24.2% through April 22nd and outperformed the S&P 500 ETF (SPY) by more than 7 percentage points. Unfortunately NAVG wasn’t nearly as popular as these 15 stock (hedge fund sentiment was quite bearish); NAVG investors were disappointed as the stock returned 0.8% and underperformed the market. If you are interested in investing in large cap stocks with huge upside potential, you should check out the top 15 most popular stocks) among hedge funds as 13 of these stocks already outperformed the market this year.