“Market conditions are changing. The continued rise in interest rates suggests we are in the early stages of a bond bear market, which could intensify as central banks withdraw liquidity. The receding tide of liquidity will start to reveal more rocks beyond what has been exposed in emerging markets so far, and the value of a value discipline will be in avoiding the biggest capital-destroying rocks. If a rock emerges on the crowded shore of U.S. momentum, it could result in a major liquidity challenge, as momentum is often most intense on the downside as a crowded trade reverses. So investors are facing a large potential trade-off right now: continue to bet on the current dominance of momentum and the S&P 500, or bet on change and take an active value bet in names with attractive value and optionality, but with negative momentum,” said Clearbridge Investments in its market commentary. We aren’t sure whether long-term interest rates will top 5% and value stocks outperform growth, but we follow hedge fund investor letters to understand where the markets and stocks might be going. This article will lay out and discuss the hedge fund and institutional investor sentiment towards Navigator Holdings Ltd (NYSE:NVGS).

Navigator Holdings Ltd (NYSE:NVGS) shareholders have witnessed an increase in support from the world’s most elite money managers of late. NVGS was in 12 hedge funds’ portfolios at the end of the fourth quarter of 2018. There were 8 hedge funds in our database with NVGS positions at the end of the previous quarter. Our calculations also showed that NVGS isn’t among the 30 most popular stocks among hedge funds.

If you’d ask most market participants, hedge funds are perceived as unimportant, outdated investment tools of years past. While there are greater than 8000 funds with their doors open at present, Our researchers hone in on the elite of this group, around 750 funds. Most estimates calculate that this group of people shepherd the majority of the hedge fund industry’s total asset base, and by keeping track of their inimitable equity investments, Insider Monkey has determined a number of investment strategies that have historically beaten the S&P 500 index. Insider Monkey’s flagship hedge fund strategy outperformed the S&P 500 index by nearly 5 percentage points per year since its inception in May 2014 through early November 2018. We were able to generate large returns even by identifying short candidates. Our portfolio of short stocks lost 27.5% since February 2017 (through March 12th) even though the market was up nearly 25% during the same period. We just shared a list of 6 short targets in our latest quarterly update and they are already down an average of 6% in less than a month.

What have hedge funds been doing with Navigator Holdings Ltd (NYSE:NVGS)?

At Q4’s end, a total of 12 of the hedge funds tracked by Insider Monkey held long positions in this stock, a change of 50% from the second quarter of 2018. Below, you can check out the change in hedge fund sentiment towards NVGS over the last 14 quarters. So, let’s examine which hedge funds were among the top holders of the stock and which hedge funds were making big moves. 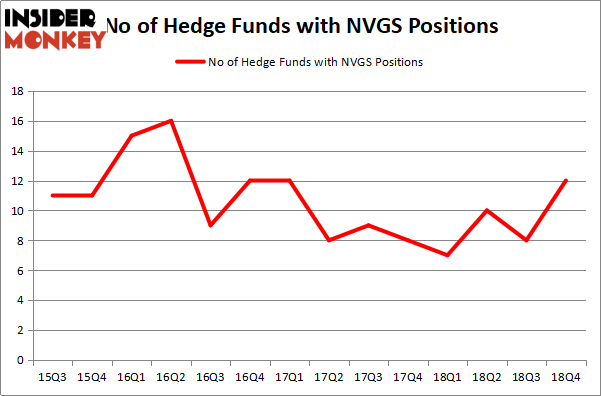 Among these funds, Invesco Private Capital (WL Ross) held the most valuable stake in Navigator Holdings Ltd (NYSE:NVGS), which was worth $205.5 million at the end of the fourth quarter. On the second spot was Horizon Asset Management which amassed $14 million worth of shares. Moreover, Royce & Associates, Trafelet Capital, and GAMCO Investors were also bullish on Navigator Holdings Ltd (NYSE:NVGS), allocating a large percentage of their portfolios to this stock.

As industrywide interest jumped, specific money managers have been driving this bullishness. Citadel Investment Group, managed by Ken Griffin, created the most outsized position in Navigator Holdings Ltd (NYSE:NVGS). Citadel Investment Group had $0.7 million invested in the company at the end of the quarter. D. E. Shaw’s D E Shaw also made a $0.3 million investment in the stock during the quarter. The other funds with brand new NVGS positions are Peter Rathjens, Bruce Clarke and John Campbell’s Arrowstreet Capital and Paul Marshall and Ian Wace’s Marshall Wace LLP.

As you can see these stocks had an average of 7.5 hedge funds with bullish positions and the average amount invested in these stocks was $38 million. That figure was $236 million in NVGS’s case. DMC Global Inc. (NASDAQ:BOOM) is the most popular stock in this table. On the other hand Independence Holding Company (NYSE:IHC) is the least popular one with only 3 bullish hedge fund positions. Navigator Holdings Ltd (NYSE:NVGS) is not the most popular stock in this group but hedge fund interest is still above average. Our calculations showed that top 15 most popular stocks) among hedge funds returned 24.2% through April 22nd and outperformed the S&P 500 ETF (SPY) by more than 7 percentage points. Hedge funds were also right about betting on NVGS, though not to the same extent, as the stock returned 17.7% and outperformed the market as well.