Out of thousands of stocks that are currently traded on the market, it is difficult to identify those that will really generate strong returns. Hedge funds and institutional investors spend millions of dollars on analysts with MBAs and PhDs, who are industry experts and well connected to other industry and media insiders on top of that. Individual investors can piggyback the hedge funds employing these talents and can benefit from their vast resources and knowledge in that way. We analyze quarterly 13F filings of nearly 750 hedge funds and, by looking at the smart money sentiment that surrounds a stock, we can determine whether it has the potential to beat the market over the long-term. Therefore, let’s take a closer look at what smart money thinks about Navigator Holdings Ltd (NYSE:NVGS).

Is Navigator Holdings Ltd (NYSE:NVGS) a bargain? The smart money is in an optimistic mood. The number of long hedge fund bets went up by 1 in recent months. Our calculations also showed that NVGS isn’t among the 30 most popular stocks among hedge funds (see the video below). NVGS was in 14 hedge funds’ portfolios at the end of June. There were 13 hedge funds in our database with NVGS holdings at the end of the previous quarter.

What does smart money think about Navigator Holdings Ltd (NYSE:NVGS)?

Heading into the third quarter of 2019, a total of 14 of the hedge funds tracked by Insider Monkey held long positions in this stock, a change of 8% from the previous quarter. On the other hand, there were a total of 10 hedge funds with a bullish position in NVGS a year ago. With hedge funds’ sentiment swirling, there exists a select group of noteworthy hedge fund managers who were boosting their stakes considerably (or already accumulated large positions). 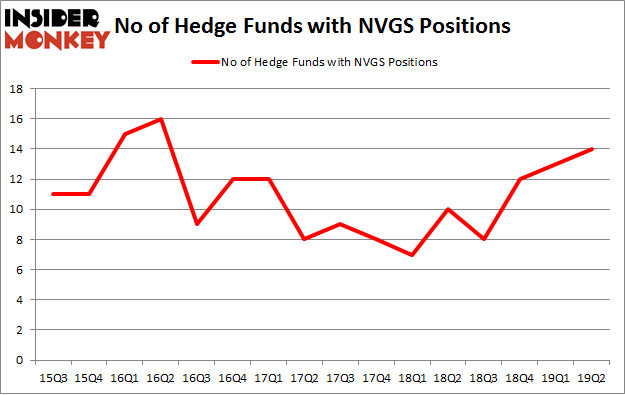 The largest stake in Navigator Holdings Ltd (NYSE:NVGS) was held by Invesco Private Capital (WL Ross), which reported holding $204.6 million worth of stock at the end of March. It was followed by Horizon Asset Management with a $13.2 million position. Other investors bullish on the company included Royce & Associates, Minerva Advisors, and GAMCO Investors.

Now, key money managers were breaking ground themselves. Corsair Capital Management, managed by Jay Petschek and Steven Major, established the most outsized position in Navigator Holdings Ltd (NYSE:NVGS). Corsair Capital Management had $0.6 million invested in the company at the end of the quarter. Minhua Zhang’s Weld Capital Management also made a $0.1 million investment in the stock during the quarter. The other funds with brand new NVGS positions are Paul Tudor Jones’s Tudor Investment Corp and Gavin Saitowitz and Cisco J. del Valle’s Springbok Capital.

As you can see these stocks had an average of 10.75 hedge funds with bullish positions and the average amount invested in these stocks was $80 million. That figure was $241 million in NVGS’s case. Fossil Group Inc (NASDAQ:FOSL) is the most popular stock in this table. On the other hand QCR Holdings, Inc. (NASDAQ:QCRH) is the least popular one with only 8 bullish hedge fund positions. Compared to these stocks Navigator Holdings Ltd (NYSE:NVGS) is more popular among hedge funds. Our calculations showed that top 20 most popular stocks among hedge funds returned 24.4% in 2019 through September 30th and outperformed the S&P 500 ETF (SPY) by 4 percentage points. Hedge funds were also right about betting on NVGS as the stock returned 14.1% during Q3 and outperformed the market by an even larger margin. Hedge funds were clearly right about piling into this stock relative to other stocks with similar market capitalizations.