Most investors tend to think that hedge funds and other asset managers are worthless, as they cannot beat even simple index fund portfolios. In fact, most people expect hedge funds to compete with and outperform the bull market that we have witnessed in recent years. However, hedge funds are generally partially hedged and aim at delivering attractive risk-adjusted returns rather than following the ups and downs of equity markets hoping that they will outperform the broader market. Our research shows that certain hedge funds do have great stock picking skills (and we can identify these hedge funds in advance pretty accurately), so let’s take a glance at the smart money sentiment towards Myers Industries, Inc. (NYSE:MYE).

Myers Industries, Inc. (NYSE:MYE) shares haven’t seen a lot of action during the third quarter. Overall, hedge fund sentiment was unchanged. The stock was in 8 hedge funds’ portfolios at the end of the fourth quarter of 2018. The level and the change in hedge fund popularity aren’t the only variables you need to analyze to decipher hedge funds’ perspectives. A stock may witness a boost in popularity but it may still be less popular than similarly priced stocks. That’s why at the end of this article we will examine companies such as Controladora Vuela Co Avcn SA CV (NYSE:VLRS), Century Communities, Inc (NYSE:CCS), and Turning Point Brands, Inc. (NYSE:TPB) to gather more data points.

If you’d ask most stock holders, hedge funds are viewed as underperforming, old investment vehicles of yesteryear. While there are over 8000 funds with their doors open today, Our researchers look at the crème de la crème of this club, about 750 funds. It is estimated that this group of investors preside over most of the smart money’s total asset base, and by paying attention to their inimitable equity investments, Insider Monkey has uncovered various investment strategies that have historically outperformed the S&P 500 index. Insider Monkey’s flagship hedge fund strategy outpaced the S&P 500 index by nearly 5 percentage points per year since its inception in May 2014 through early November 2018. We were able to generate large returns even by identifying short candidates. Our portfolio of short stocks lost 27.5% since February 2017 (through March 12th) even though the market was up nearly 25% during the same period. We just shared a list of 6 short targets in our latest quarterly update and they are already down an average of 6% in less than a month.

At Q4’s end, a total of 8 of the hedge funds tracked by Insider Monkey held long positions in this stock, a change of 0% from the previous quarter. The graph below displays the number of hedge funds with bullish position in MYE over the last 14 quarters. With the smart money’s capital changing hands, there exists an “upper tier” of key hedge fund managers who were upping their stakes considerably (or already accumulated large positions). 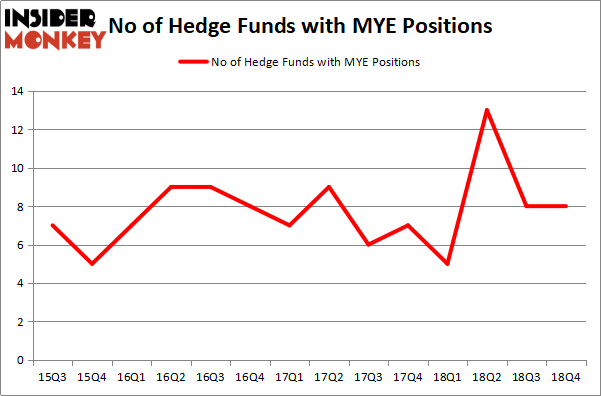 Among these funds, GAMCO Investors held the most valuable stake in Myers Industries, Inc. (NYSE:MYE), which was worth $64.8 million at the end of the fourth quarter. On the second spot was Renaissance Technologies which amassed $12 million worth of shares. Moreover, Citadel Investment Group, Wallace R. Weitz & Co., and DC Capital Partners were also bullish on Myers Industries, Inc. (NYSE:MYE), allocating a large percentage of their portfolios to this stock.

Seeing as Myers Industries, Inc. (NYSE:MYE) has experienced bearish sentiment from the entirety of the hedge funds we track, we can see that there were a few fund managers that decided to sell off their entire stakes in the third quarter. It’s worth mentioning that Michael Platt and William Reeves’s BlueCrest Capital Mgmt. sold off the largest position of all the hedgies tracked by Insider Monkey, totaling close to $0.2 million in stock. Paul Tudor Jones’s fund, Tudor Investment Corp, also dumped its stock, about $0.2 million worth. These transactions are important to note, as total hedge fund interest stayed the same (this is a bearish signal in our experience).

As you can see these stocks had an average of 8.25 hedge funds with bullish positions and the average amount invested in these stocks was $57 million. That figure was $85 million in MYE’s case. Century Communities, Inc (NYSE:CCS) is the most popular stock in this table. On the other hand CooTek (Cayman) Inc. (NYSE:CTK) is the least popular one with only 1 bullish hedge fund positions. Myers Industries, Inc. (NYSE:MYE) is not the least popular stock in this group but hedge fund interest is still below average. Our calculations showed that top 15 most popular stocks) among hedge funds returned 24.2% through April 22nd and outperformed the S&P 500 ETF (SPY) by more than 7 percentage points. A small number of hedge funds were also right about betting on MYE, though not to the same extent, as the stock returned 20.8% and outperformed the market as well.