While the market driven by short-term sentiment influenced by the accomodative interest rate environment in the US, increasing oil prices and optimism towards the resolution of the trade war with China, many smart money investors kept their cautious approach regarding the current bull run in the first quarter and hedging or reducing many of their long positions. However, as we know, big investors usually buy stocks with strong fundamentals, which is why we believe we can profit from imitating them. In this article, we are going to take a look at the smart money sentiment surrounding Morgan Stanley (NYSE:MS).

Morgan Stanley (NYSE:MS) investors should pay attention to a decrease in support from the world’s most elite money managers lately. Our calculations also showed that MS isn’t among the 30 most popular stocks among hedge funds.

At the moment there are plenty of tools shareholders employ to value publicly traded companies. Two of the best tools are hedge fund and insider trading signals. Our experts have shown that, historically, those who follow the top picks of the top investment managers can outpace the broader indices by a superb margin (see the details here). 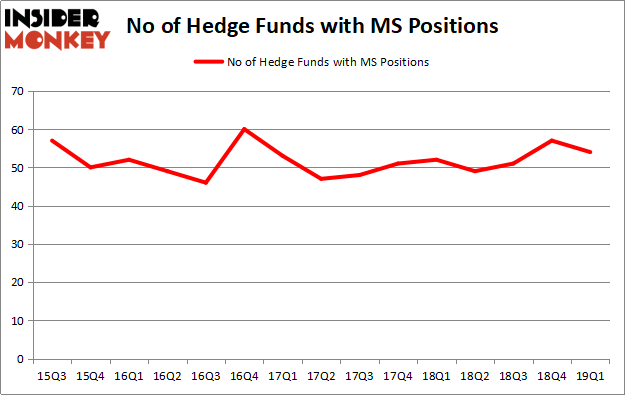 More specifically, ValueAct Capital was the largest shareholder of Morgan Stanley (NYSE:MS), with a stake worth $1106.8 million reported as of the end of March. Trailing ValueAct Capital was Eagle Capital Management, which amassed a stake valued at $648.3 million. Pzena Investment Management, Citadel Investment Group, and GLG Partners were also very fond of the stock, giving the stock large weights in their portfolios.

Because Morgan Stanley (NYSE:MS) has witnessed declining sentiment from hedge fund managers, it’s safe to say that there was a specific group of fund managers who were dropping their positions entirely by the end of the third quarter. It’s worth mentioning that Robert Pohly’s Samlyn Capital sold off the largest investment of the 700 funds watched by Insider Monkey, worth an estimated $71 million in call options. Robert Pohly’s fund, Samlyn Capital, also cut its call options, about $60 million worth. These bearish behaviors are important to note, as aggregate hedge fund interest dropped by 3 funds by the end of the third quarter.

As you can see these stocks had an average of 55.75 hedge funds with bullish positions and the average amount invested in these stocks was $3344 million. That figure was $4060 million in MS’s case. Goldman Sachs Group, Inc. (NYSE:GS) is the most popular stock in this table. On the other hand Automatic Data Processing, Inc. (NASDAQ:ADP) is the least popular one with only 39 bullish hedge fund positions. Morgan Stanley (NYSE:MS) is not the least popular stock in this group but hedge fund interest is still below average. Our calculations showed that top 20 most popular stocks among hedge funds returned 1.9% in Q2 through May 30th and outperformed the S&P 500 ETF (SPY) by more than 3 percentage points. A small number of hedge funds were also right about betting on MS, though not to the same extent, as the stock returned -0.3% during the same time frame and outperformed the market as well.