Is Monotype Imaging Holdings Inc. (NASDAQ:TYPE) going to take off soon? Prominent investors are getting less optimistic. The number of long hedge fund bets dropped by 1 in recent months. Our calculations also showed that TYPE isn’t among the 30 most popular stocks among hedge funds.

How have hedgies been trading Monotype Imaging Holdings Inc. (NASDAQ:TYPE)? 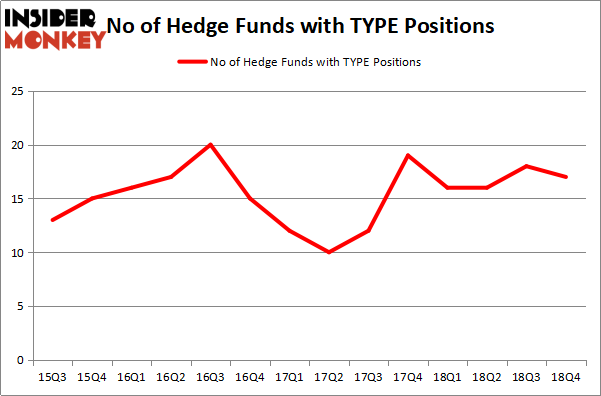 The largest stake in Monotype Imaging Holdings Inc. (NASDAQ:TYPE) was held by RGM Capital, which reported holding $57.5 million worth of stock at the end of December. It was followed by Trigran Investments with a $56.9 million position. Other investors bullish on the company included Renaissance Technologies, Daruma Asset Management, and Marshall Wace LLP.

Due to the fact that Monotype Imaging Holdings Inc. (NASDAQ:TYPE) has witnessed declining sentiment from the smart money, it’s easy to see that there were a few hedgies that elected to cut their positions entirely by the end of the third quarter. It’s worth mentioning that Alec Litowitz and Ross Laser’s Magnetar Capital dumped the largest position of the 700 funds watched by Insider Monkey, worth an estimated $0.5 million in stock. Ernest Chow and Jonathan Howe’s fund, Sensato Capital Management, also sold off its stock, about $0.4 million worth. These moves are important to note, as total hedge fund interest dropped by 1 funds by the end of the third quarter.

As you can see these stocks had an average of 6.5 hedge funds with bullish positions and the average amount invested in these stocks was $21 million. That figure was $177 million in TYPE’s case. Century Aluminum Co (NASDAQ:CENX) is the most popular stock in this table. On the other hand X Financial (NYSE:XYF) is the least popular one with only 2 bullish hedge fund positions. Compared to these stocks Monotype Imaging Holdings Inc. (NASDAQ:TYPE) is more popular among hedge funds. Our calculations showed that top 15 most popular stocks) among hedge funds returned 24.2% through April 22nd and outperformed the S&P 500 ETF (SPY) by more than 7 percentage points. Hedge funds were also right about betting on TYPE as the stock returned 33.7% and outperformed the market by an even larger margin. Hedge funds were clearly right about piling into this stock relative to other stocks with similar market capitalizations.