The Insider Monkey team has completed processing the quarterly 13F filings for the December quarter submitted by the hedge funds and other money managers included in our extensive database. Most hedge fund investors endured a torrid quarter, which certainly propelled them to adjust their equity holdings so as to maintain the desired risk profile. As a result, the relevancy of these public filings and their content is indisputable, as they may reveal numerous high-potential stocks. The following article will discuss the smart money sentiment towards Model N Inc (NYSE:MODN).

Hedge fund interest in Model N Inc (NYSE:MODN) shares was flat at the end of last quarter. This is usually a negative indicator. At the end of this article we will also compare MODN to other stocks including The York Water Company (NASDAQ:YORW), Great Lakes Dredge & Dock Corporation (NASDAQ:GLDD), and One Madison Corporation (NYSE:OMAD) to get a better sense of its popularity.

Today there are dozens of gauges shareholders use to size up stocks. A pair of the most innovative gauges are hedge fund and insider trading indicators. We have shown that, historically, those who follow the top picks of the best money managers can outclass their index-focused peers by a healthy amount (see the details here).

At Q4’s end, a total of 14 of the hedge funds tracked by Insider Monkey were bullish on this stock, a change of 0% from the second quarter of 2018. Below, you can check out the change in hedge fund sentiment towards MODN over the last 14 quarters. So, let’s find out which hedge funds were among the top holders of the stock and which hedge funds were making big moves. 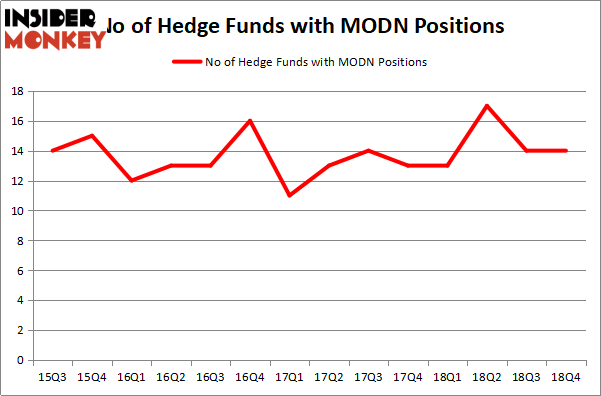 More specifically, Trigran Investments was the largest shareholder of Model N Inc (NYSE:MODN), with a stake worth $26.2 million reported as of the end of December. Trailing Trigran Investments was Renaissance Technologies, which amassed a stake valued at $11.8 million. D E Shaw, Portolan Capital Management, and Two Sigma Advisors were also very fond of the stock, giving the stock large weights in their portfolios.

Seeing as Model N Inc (NYSE:MODN) has witnessed a decline in interest from the smart money, it’s safe to say that there exists a select few money managers that elected to cut their entire stakes heading into Q3. At the top of the heap, Justin John Ferayorni’s Tamarack Capital Management sold off the largest stake of the “upper crust” of funds followed by Insider Monkey, worth about $1.6 million in stock. Kamran Moghtaderi’s fund, Eversept Partners, also dumped its stock, about $1.1 million worth. These transactions are intriguing to say the least, as total hedge fund interest stayed the same (this is a bearish signal in our experience).

As you can see these stocks had an average of 10 hedge funds with bullish positions and the average amount invested in these stocks was $38 million. That figure was $66 million in MODN’s case. Great Lakes Dredge & Dock Corporation (NASDAQ:GLDD) is the most popular stock in this table. On the other hand The York Water Company (NASDAQ:YORW) is the least popular one with only 5 bullish hedge fund positions. Model N Inc (NYSE:MODN) is not the most popular stock in this group but hedge fund interest is still above average. Our calculations showed that top 15 most popular stocks) among hedge funds returned 24.2% through April 22nd and outperformed the S&P 500 ETF (SPY) by more than 7 percentage points. Hedge funds were also right about betting on MODN as the stock returned 35.2% and outperformed the market by an even larger margin. Hedge funds were rewarded for their relative bullishness.