How do we determine whether MGIC Investment Corporation (NYSE:MTG) makes for a good investment at the moment? We analyze the sentiment of a select group of the very best investors in the world, who spend immense amounts of time and resources studying companies. They may not always be right (no one is), but data shows that their consensus long positions have historically outperformed the market when we adjust for known risk factors.

MGIC Investment Corporation (NYSE:MTG) investors should pay attention to a decrease in hedge fund sentiment recently. Our calculations also showed that MTG isn’t among the 30 most popular stocks among hedge funds.

If you’d ask most stock holders, hedge funds are viewed as unimportant, old financial vehicles of yesteryear. While there are over 8000 funds trading at the moment, Our researchers hone in on the aristocrats of this group, approximately 750 funds. Most estimates calculate that this group of people orchestrate most of the smart money’s total asset base, and by paying attention to their inimitable stock picks, Insider Monkey has spotted a number of investment strategies that have historically surpassed the S&P 500 index. Insider Monkey’s flagship hedge fund strategy exceeded the S&P 500 index by around 5 percentage points per year since its inception in May 2014 through the end of May. We were able to generate large returns even by identifying short candidates. Our portfolio of short stocks lost 30.9% since February 2017 (through May 30th) even though the market was up nearly 24% during the same period. We just shared a list of 5 short targets in our latest quarterly update and they are already down an average of 11.9% in less than a couple of weeks whereas our long picks outperformed the market by 2 percentage points in this volatile 2 week period.

What have hedge funds been doing with MGIC Investment Corporation (NYSE:MTG)? 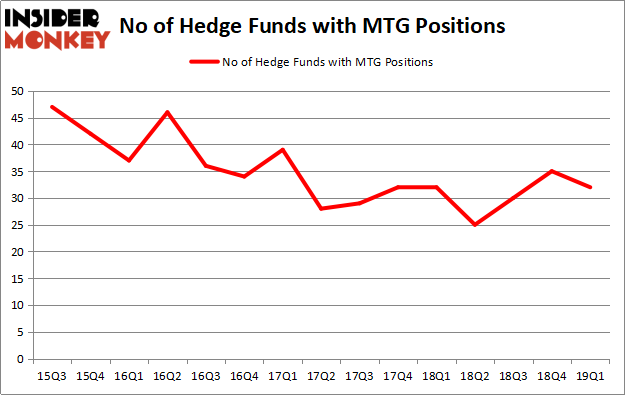 Since MGIC Investment Corporation (NYSE:MTG) has faced declining sentiment from the entirety of the hedge funds we track, logic holds that there lies a certain “tier” of hedgies who sold off their full holdings by the end of the third quarter. Intriguingly, Jeffrey Hinkle’s Shoals Capital Management dumped the biggest investment of the 700 funds tracked by Insider Monkey, comprising an estimated $12 million in stock. Steven Tananbaum’s fund, GoldenTree Asset Management, also dumped its stock, about $10.4 million worth. These bearish behaviors are important to note, as aggregate hedge fund interest was cut by 3 funds by the end of the third quarter.

As you can see these stocks had an average of 15 hedge funds with bullish positions and the average amount invested in these stocks was $607 million. That figure was $393 million in MTG’s case. ViaSat, Inc. (NASDAQ:VSAT) is the most popular stock in this table. On the other hand PLDT Inc. (NYSE:PHI) is the least popular one with only 5 bullish hedge fund positions. Compared to these stocks MGIC Investment Corporation (NYSE:MTG) is more popular among hedge funds. Our calculations showed that top 20 most popular stocks among hedge funds returned 1.9% in Q2 through May 30th and outperformed the S&P 500 ETF (SPY) by more than 3 percentage points. Hedge funds were also right about betting on MTG as the stock returned 4.1% during the same period and outperformed the market by an even larger margin. Hedge funds were clearly right about piling into this stock relative to other stocks with similar market capitalizations.