The government requires hedge funds and wealthy investors that crossed the $100 million equity holdings threshold are required to file a report that shows their positions at the end of every quarter. Even though it isn’t the intention, these filings level the playing field for ordinary investors. The latest round of 13F filings disclosed the funds’ positions on December 31. We at Insider Monkey have made an extensive database of nearly 750 of those elite funds and prominent investors’ filings. In this article, we analyze how these elite funds and prominent investors traded Meridian Bancorp, Inc. (NASDAQ:EBSB) based on those filings.

Is Meridian Bancorp, Inc. (NASDAQ:EBSB) going to take off soon? Prominent investors are becoming less hopeful. The number of long hedge fund positions were cut by 3 lately. Our calculations also showed that EBSB isn’t among the 30 most popular stocks among hedge funds. EBSB was in 10 hedge funds’ portfolios at the end of the fourth quarter of 2018. There were 13 hedge funds in our database with EBSB positions at the end of the previous quarter.

Heading into the first quarter of 2019, a total of 10 of the hedge funds tracked by Insider Monkey were bullish on this stock, a change of -23% from one quarter earlier. By comparison, 14 hedge funds held shares or bullish call options in EBSB a year ago. With hedgies’ capital changing hands, there exists a few key hedge fund managers who were boosting their holdings substantially (or already accumulated large positions). 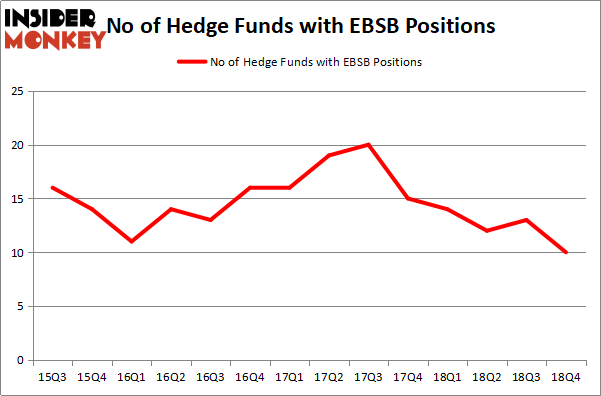 According to publicly available hedge fund and institutional investor holdings data compiled by Insider Monkey, Renaissance Technologies, managed by Jim Simons, holds the most valuable position in Meridian Bancorp, Inc. (NASDAQ:EBSB). Renaissance Technologies has a $28.6 million position in the stock, comprising less than 0.1%% of its 13F portfolio. Coming in second is Impax Asset Management, managed by Ian Simm, which holds a $19.1 million position; the fund has 0.3% of its 13F portfolio invested in the stock. Other members of the smart money that are bullish consist of D. E. Shaw’s D E Shaw, Israel Englander’s Millennium Management and John Overdeck and David Siegel’s Two Sigma Advisors.

Due to the fact that Meridian Bancorp, Inc. (NASDAQ:EBSB) has witnessed a decline in interest from the smart money, logic holds that there lies a certain “tier” of funds who sold off their entire stakes by the end of the third quarter. Intriguingly, Peter Rathjens, Bruce Clarke and John Campbell’s Arrowstreet Capital dumped the largest position of the “upper crust” of funds followed by Insider Monkey, comprising close to $0.8 million in stock, and David Costen Haley’s HBK Investments was right behind this move, as the fund dropped about $0.3 million worth. These bearish behaviors are important to note, as aggregate hedge fund interest dropped by 3 funds by the end of the third quarter.

As you can see these stocks had an average of 16 hedge funds with bullish positions and the average amount invested in these stocks was $92 million. That figure was $63 million in EBSB’s case. Verso Corporation (NYSE:VRS) is the most popular stock in this table. On the other hand TCG BDC, Inc. (NASDAQ:CGBD) is the least popular one with only 10 bullish hedge fund positions. Compared to these stocks Meridian Bancorp, Inc. (NASDAQ:EBSB) is even less popular than CGBD. Hedge funds dodged a bullet by taking a bearish stance towards EBSB. Our calculations showed that the top 15 most popular hedge fund stocks returned 24.2% through April 22nd and outperformed the S&P 500 ETF (SPY) by more than 7 percentage points. Unfortunately EBSB wasn’t nearly as popular as these 15 stock (hedge fund sentiment was very bearish); EBSB investors were disappointed as the stock returned 14.7% and underperformed the market. If you are interested in investing in large cap stocks with huge upside potential, you should check out the top 15 most popular stocks) among hedge funds as 13 of these stocks already outperformed the market this year.