Like everyone else, elite investors make mistakes. Some of their top consensus picks, such as Amazon, Facebook and Alibaba, have not done well in Q4 due to various reasons. Nevertheless, the data show elite investors’ consensus picks have done well on average over the long-term. The top 20 stocks among hedge funds beat the S&P 500 Index ETF by 4 percentage points so far this year. Because their consensus picks have done well, we pay attention to what elite funds think before doing extensive research on a stock. In this article, we take a closer look at Mercer International Inc. (NASDAQ:MERC) from the perspective of those elite funds.

Mercer International Inc. (NASDAQ:MERC) was in 16 hedge funds’ portfolios at the end of June. MERC has experienced an increase in support from the world’s most elite money managers in recent months. There were 14 hedge funds in our database with MERC positions at the end of the previous quarter. Our calculations also showed that MERC isn’t among the 30 most popular stocks among hedge funds (see the video below).

Unlike former hedge manager, Dr. Steve Sjuggerud, who is convinced Dow will soar past 40000, our long-short investment strategy doesn’t rely on bull markets to deliver double digit returns. We only rely on hedge fund buy/sell signals. We’re going to take a glance at the fresh hedge fund action regarding Mercer International Inc. (NASDAQ:MERC).

Heading into the third quarter of 2019, a total of 16 of the hedge funds tracked by Insider Monkey held long positions in this stock, a change of 14% from the previous quarter. Below, you can check out the change in hedge fund sentiment towards MERC over the last 16 quarters. With hedge funds’ sentiment swirling, there exists an “upper tier” of key hedge fund managers who were adding to their holdings considerably (or already accumulated large positions). 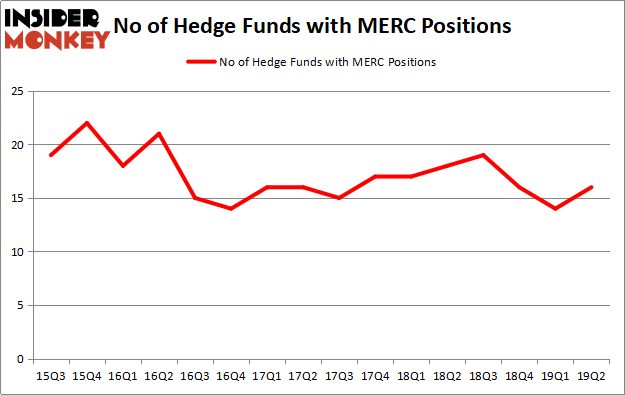 The largest stake in Mercer International Inc. (NASDAQ:MERC) was held by Gates Capital Management, which reported holding $41.7 million worth of stock at the end of March. It was followed by Redwood Capital Management with a $32 million position. Other investors bullish on the company included Knighthead Capital, Renaissance Technologies, and Millennium Management.

As industrywide interest jumped, some big names have been driving this bullishness. Royce & Associates, managed by Chuck Royce, created the largest position in Mercer International Inc. (NASDAQ:MERC). Royce & Associates had $6.4 million invested in the company at the end of the quarter. Richard Driehaus’s Driehaus Capital also initiated a $0.8 million position during the quarter. The other funds with brand new MERC positions are Paul Tudor Jones’s Tudor Investment Corp, Benjamin A. Smith’s Laurion Capital Management, and Peter Algert and Kevin Coldiron’s Algert Coldiron Investors.

As you can see these stocks had an average of 15.75 hedge funds with bullish positions and the average amount invested in these stocks was $89 million. That figure was $160 million in MERC’s case. PGT Innovations Inc. (NYSE:PGTI) is the most popular stock in this table. On the other hand Orthofix Medical Inc. (NASDAQ:OFIX) is the least popular one with only 13 bullish hedge fund positions. Mercer International Inc. (NASDAQ:MERC) is not the most popular stock in this group but hedge fund interest is still above average. This is a slightly positive signal but we’d rather spend our time researching stocks that hedge funds are piling on. Our calculations showed that top 20 most popular stocks among hedge funds returned 24.4% in 2019 through September 30th and outperformed the S&P 500 ETF (SPY) by 4 percentage points. Unfortunately MERC wasn’t nearly as popular as these 20 stocks and hedge funds that were betting on MERC were disappointed as the stock returned -18.1% during the third quarter and underperformed the market. If you are interested in investing in large cap stocks with huge upside potential, you should check out the top 20 most popular stocks among hedge funds as many of these stocks already outperformed the market so far this year.