Like everyone else, elite investors make mistakes. Some of their top consensus picks, such as Amazon, Facebook and Alibaba, have not done well in Q4 due to various reasons. Nevertheless, the data show elite investors’ consensus picks have done well on average over the long-term. The top 15 S&P 500 stocks among hedge funds at the end of September 2018 returned an average of 1% through March 15th whereas the S&P 500 Index ETF lost 2.2% during the same period. Because their consensus picks have done well, we pay attention to what elite funds think before doing extensive research on a stock. In this article, we take a closer look at Medical Properties Trust, Inc. (NYSE:MPW) from the perspective of those elite funds.

Is Medical Properties Trust, Inc. (NYSE:MPW) a buy here? The best stock pickers are getting more optimistic. The number of long hedge fund bets improved by 6 in recent months. Our calculations also showed that MPW isn’t among the 30 most popular stocks among hedge funds. MPW was in 16 hedge funds’ portfolios at the end of the fourth quarter of 2018. There were 10 hedge funds in our database with MPW holdings at the end of the previous quarter.

At the end of the fourth quarter, a total of 16 of the hedge funds tracked by Insider Monkey held long positions in this stock, a change of 60% from one quarter earlier. Below, you can check out the change in hedge fund sentiment towards MPW over the last 14 quarters. So, let’s examine which hedge funds were among the top holders of the stock and which hedge funds were making big moves. 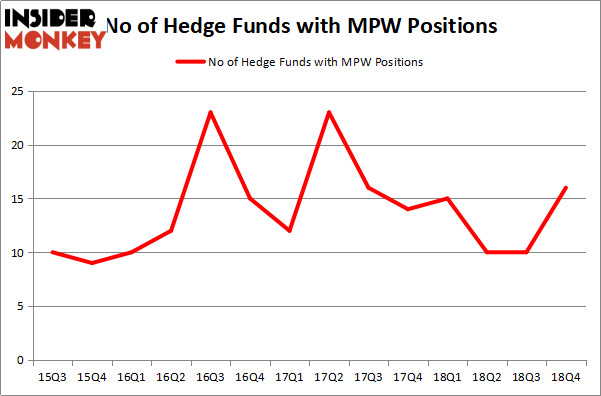 Of the funds tracked by Insider Monkey, Cardinal Capital, managed by Amy Minella, holds the largest position in Medical Properties Trust, Inc. (NYSE:MPW). Cardinal Capital has a $106.1 million position in the stock, comprising 3.9% of its 13F portfolio. The second largest stake is held by Renaissance Technologies, managed by Jim Simons, which holds a $57.5 million position; 0.1% of its 13F portfolio is allocated to the stock. Other peers that hold long positions consist of David Harding’s Winton Capital Management, Gilchrist Berg’s Water Street Capital and D. E. Shaw’s D E Shaw.

As industrywide interest jumped, key money managers have been driving this bullishness. Water Street Capital, managed by Gilchrist Berg, created the largest position in Medical Properties Trust, Inc. (NYSE:MPW). Water Street Capital had $11.1 million invested in the company at the end of the quarter. D. E. Shaw’s D E Shaw also made a $7.6 million investment in the stock during the quarter. The other funds with new positions in the stock are Matthew Tewksbury’s Stevens Capital Management, John Overdeck and David Siegel’s Two Sigma Advisors, and Ronald Hua’s Qtron Investments.

As you can see these stocks had an average of 18.5 hedge funds with bullish positions and the average amount invested in these stocks was $356 million. That figure was $225 million in MPW’s case. World Wrestling Entertainment, Inc. (NYSE:WWE) is the most popular stock in this table. On the other hand Enable Midstream Partners LP (NYSE:ENBL) is the least popular one with only 4 bullish hedge fund positions. Medical Properties Trust, Inc. (NYSE:MPW) is not the least popular stock in this group but hedge fund interest is still below average. This is a slightly negative signal and we’d rather spend our time researching stocks that hedge funds are piling on. Our calculations showed that the top 15 most popular stocks among hedge funds returned 21.3% through April 8th and outperformed the S&P 500 ETF (SPY) by more than 5 percentage points. Hedge funds were also right about betting on MPW, though not to the same extent, as the stock returned 17.4% and outperformed the market as well.