Is Marcus & Millichap Inc (NYSE:MMI) a good investment right now? We check hedge fund and billionaire investor sentiment before delving into hours of research. Hedge funds spend millions of dollars on Ivy League graduates, expert networks, and get tips from investment bankers and industry insiders. Sure they sometimes fail miserably, but their consensus stock picks historically outperformed the market after adjusting for known risk factors.

Marcus & Millichap Inc (NYSE:MMI) shares haven’t seen a lot of action during the second quarter. Overall, hedge fund sentiment was unchanged. The stock was in 12 hedge funds’ portfolios at the end of June. At the end of this article we will also compare MMI to other stocks including Brookline Bancorp, Inc. (NASDAQ:BRKL), OFG Bancorp (NYSE:OFG), and Winnebago Industries, Inc. (NYSE:WGO) to get a better sense of its popularity. Our calculations also showed that MMI isn’t among the 30 most popular stocks among hedge funds (see the video below).

At the end of the second quarter, a total of 12 of the hedge funds tracked by Insider Monkey were long this stock, a change of 0% from the first quarter of 2019. By comparison, 15 hedge funds held shares or bullish call options in MMI a year ago. With hedge funds’ sentiment swirling, there exists a few noteworthy hedge fund managers who were adding to their stakes significantly (or already accumulated large positions). 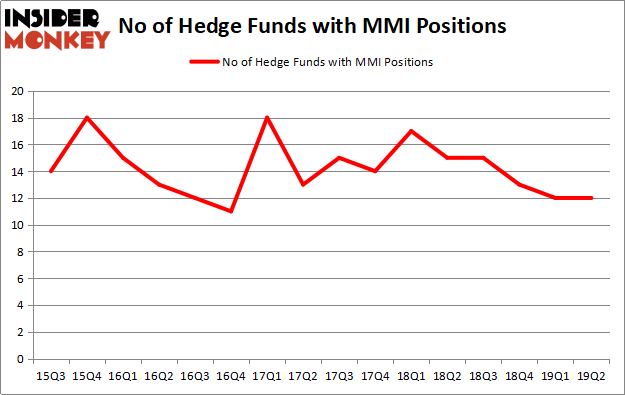 Because Marcus & Millichap Inc (NYSE:MMI) has faced declining sentiment from the smart money, logic holds that there exists a select few hedgies that elected to cut their entire stakes heading into Q3. It’s worth mentioning that David Costen Haley’s HBK Investments dropped the biggest investment of all the hedgies watched by Insider Monkey, valued at about $1.2 million in stock, and Joel Greenblatt’s Gotham Asset Management was right behind this move, as the fund dropped about $0.3 million worth. These bearish behaviors are intriguing to say the least, as aggregate hedge fund interest stayed the same (this is a bearish signal in our experience).

As you can see these stocks had an average of 16.25 hedge funds with bullish positions and the average amount invested in these stocks was $76 million. That figure was $97 million in MMI’s case. Michaels Companies Inc (NASDAQ:MIK) is the most popular stock in this table. On the other hand Brookline Bancorp, Inc. (NASDAQ:BRKL) is the least popular one with only 8 bullish hedge fund positions. Marcus & Millichap Inc (NYSE:MMI) is not the least popular stock in this group but hedge fund interest is still below average. Our calculations showed that top 20 most popular stocks among hedge funds returned 24.4% in 2019 through September 30th and outperformed the S&P 500 ETF (SPY) by 4 percentage points. A small number of hedge funds were also right about betting on MMI as the stock returned 15% during the same time frame and outperformed the market by an even larger margin.