Most investors tend to think that hedge funds and other asset managers are worthless, as they cannot beat even simple index fund portfolios. In fact, most people expect hedge funds to compete with and outperform the bull market that we have witnessed in recent years. However, hedge funds are generally partially hedged and aim at delivering attractive risk-adjusted returns rather than following the ups and downs of equity markets hoping that they will outperform the broader market. Our research shows that certain hedge funds do have great stock picking skills (and we can identify these hedge funds in advance pretty accurately), so let’s take a glance at the smart money sentiment towards M.D.C. Holdings, Inc. (NYSE:MDC).

Is M.D.C. Holdings, Inc. (NYSE:MDC) an excellent investment right now? The best stock pickers are in a bullish mood. The number of bullish hedge fund positions increased by 5 recently. Our calculations also showed that MDC isn’t among the 30 most popular stocks among hedge funds. MDC was in 16 hedge funds’ portfolios at the end of December. There were 11 hedge funds in our database with MDC positions at the end of the previous quarter.

What does the smart money think about M.D.C. Holdings, Inc. (NYSE:MDC)?

Heading into the first quarter of 2019, a total of 16 of the hedge funds tracked by Insider Monkey held long positions in this stock, a change of 45% from the previous quarter. On the other hand, there were a total of 16 hedge funds with a bullish position in MDC a year ago. With hedge funds’ positions undergoing their usual ebb and flow, there exists a select group of key hedge fund managers who were increasing their holdings significantly (or already accumulated large positions). 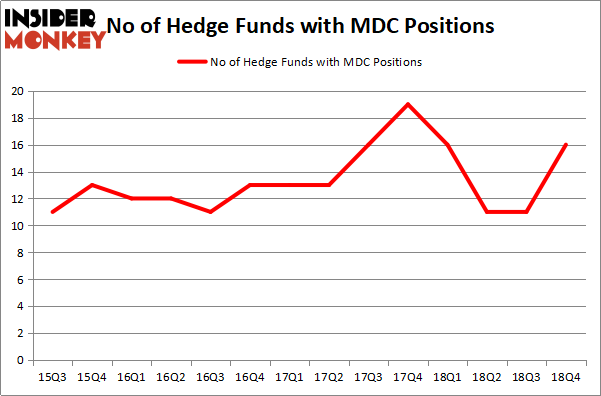 With a general bullishness amongst the heavyweights, key hedge funds have jumped into M.D.C. Holdings, Inc. (NYSE:MDC) headfirst. ZWEIG DIMENNA PARTNERS, managed by Joe DiMenna, assembled the biggest position in M.D.C. Holdings, Inc. (NYSE:MDC). ZWEIG DIMENNA PARTNERS had $23.6 million invested in the company at the end of the quarter. Dmitry Balyasny’s Balyasny Asset Management also made a $7.9 million investment in the stock during the quarter. The other funds with brand new MDC positions are Jim Simons’s Renaissance Technologies, D. E. Shaw’s D E Shaw, and Mark N. Diker’s Diker Management.