Insider Monkey has processed numerous 13F filings of hedge funds and famous investors to create an extensive database of hedge fund holdings. The 13F filings show the hedge funds’ and investors’ positions as of the end of the fourth quarter. You can find write-ups about an individual hedge fund’s trades on numerous financial news websites. However, in this article we will take a look at their collective moves and analyze what the smart money thinks of LINE Corporation (NYSE:LN) based on that data.

Is LINE Corporation (NYSE:LN) a buy right now? The smart money is getting less bullish. The number of bullish hedge fund positions dropped by 1 lately. Our calculations also showed that LN isn’t among the 30 most popular stocks among hedge funds. 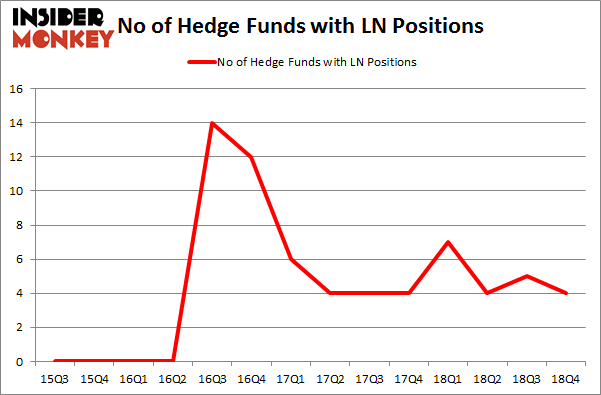 The largest stake in LINE Corporation (NYSE:LN) was held by Tremblant Capital, which reported holding $49.7 million worth of stock at the end of September. It was followed by LMR Partners with a $1.6 million position. Other investors bullish on the company included Renaissance Technologies, Citadel Investment Group, and D E Shaw.

We view hedge fund activity in the stock unfavorable, but in this case there was only a single hedge fund selling its entire position: Hillhouse Capital Management. One hedge fund selling its entire position doesn’t always imply a bearish intent. Theoretically a hedge fund may decide to sell a promising position in order to invest the proceeds in a more promising idea. However, we don’t think this is the case in this case because none of the 700+ hedge funds tracked by Insider Monkey identified LN as a viable investment and initiated a position in the stock.

As you can see these stocks had an average of 24.75 hedge funds with bullish positions and the average amount invested in these stocks was $386 million. That figure was $53 million in LN’s case. American Financial Group (NYSE:AFG) is the most popular stock in this table. On the other hand ANGI Homeservices Inc.  (NASDAQ:ANGI) is the least popular one with only 22 bullish hedge fund positions. Compared to these stocks LINE Corporation (NYSE:LN) is even less popular than ANGI. Considering that hedge funds aren’t fond of this stock in relation to other companies analyzed in this article, it may be a good idea to analyze it in detail and understand why the smart money isn’t behind this stock. This isn’t necessarily bad news. Although it is possible that hedge funds may think the stock is overpriced and view the stock as a short candidate, they may not be very familiar with the bullish thesis. Our calculations showed that top 15 most popular stocks among hedge funds returned 21.3% through April 8th and outperformed the S&P 500 ETF (SPY) by more than 5 percentage points. Unfortunately LN wasn’t in this group. Hedge funds that bet on LN were disappointed as the stock returned 1% and underperformed the market. If you are interested in investing in large cap stocks, you should check out the top 15 hedge fund stocks as 12 of these outperformed the market.