Lincoln Electric Holdings, Inc. (NASDAQ:LECO) was in 22 hedge funds’ portfolios at the end of the second quarter of 2019. LECO has experienced a decrease in hedge fund sentiment in recent months. There were 26 hedge funds in our database with LECO positions at the end of the previous quarter. Our calculations also showed that LECO isn’t among the 30 most popular stocks among hedge funds.

According to most market participants, hedge funds are seen as slow, outdated investment vehicles of years past. While there are over 8000 funds in operation at the moment, Our experts look at the top tier of this club, around 750 funds. These investment experts administer the lion’s share of the smart money’s total capital, and by keeping an eye on their first-class equity investments, Insider Monkey has deciphered a number of investment strategies that have historically defeated the S&P 500 index. Insider Monkey’s flagship hedge fund strategy outperformed the S&P 500 index by around 5 percentage points per annum since its inception in May 2014. We were able to generate large returns even by identifying short candidates. Our portfolio of short stocks lost 25.7% since February 2017 (through September 30th) even though the market was up more than 33% during the same period. We just shared a list of 10 short targets in our latest quarterly update .

Unlike some fund managers who are betting on Dow reaching 40000 in a year, our long-short investment strategy doesn’t rely on bull markets to deliver double digit returns. We only rely on hedge fund buy/sell signals. Let’s go over the key hedge fund action surrounding Lincoln Electric Holdings, Inc. (NASDAQ:LECO).

At Q2’s end, a total of 22 of the hedge funds tracked by Insider Monkey were long this stock, a change of -15% from the previous quarter. By comparison, 19 hedge funds held shares or bullish call options in LECO a year ago. With hedgies’ capital changing hands, there exists a few noteworthy hedge fund managers who were upping their holdings substantially (or already accumulated large positions). 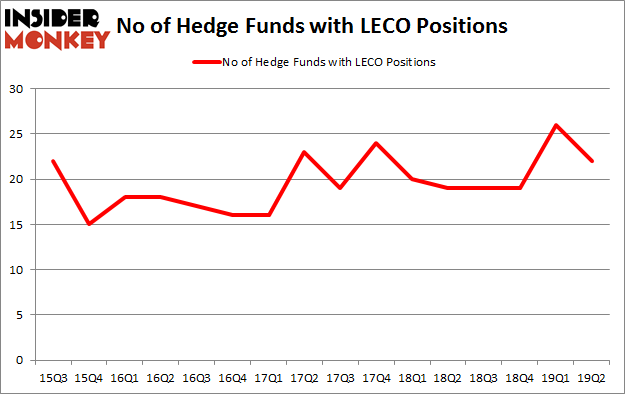 Among these funds, Royce & Associates held the most valuable stake in Lincoln Electric Holdings, Inc. (NASDAQ:LECO), which was worth $90.9 million at the end of the second quarter. On the second spot was Fisher Asset Management which amassed $81.2 million worth of shares. Moreover, GLG Partners, Two Sigma Advisors, and AQR Capital Management were also bullish on Lincoln Electric Holdings, Inc. (NASDAQ:LECO), allocating a large percentage of their portfolios to this stock.

Because Lincoln Electric Holdings, Inc. (NASDAQ:LECO) has experienced falling interest from the entirety of the hedge funds we track, we can see that there were a few hedge funds who sold off their full holdings heading into Q3. Intriguingly, Phill Gross and Robert Atchinson’s Adage Capital Management sold off the biggest position of all the hedgies monitored by Insider Monkey, comprising about $18.2 million in stock, and Peter Rathjens, Bruce Clarke and John Campbell’s Arrowstreet Capital was right behind this move, as the fund sold off about $4.2 million worth. These transactions are important to note, as total hedge fund interest dropped by 4 funds heading into Q3.

As you can see these stocks had an average of 17.75 hedge funds with bullish positions and the average amount invested in these stocks was $262 million. That figure was $280 million in LECO’s case. Entegris Inc (NASDAQ:ENTG) is the most popular stock in this table. On the other hand Leggett & Platt, Incorporated (NYSE:LEG) is the least popular one with only 9 bullish hedge fund positions. Lincoln Electric Holdings, Inc. (NASDAQ:LECO) is not the most popular stock in this group but hedge fund interest is still above average. Our calculations showed that top 20 most popular stocks (view the video below) among hedge funds returned 24.4% in 2019 through September 30th and outperformed the S&P 500 ETF (SPY) by 4 percentage points. Hedge funds were also right about betting on LECO as the stock returned 6% during the third quarter and outperformed the market. Hedge funds were rewarded for their relative bullishness.