While the market driven by short-term sentiment influenced by uncertainty regarding the future of the interest rate environment in the US, declining oil prices and the trade war with China, many smart money investors kept their optimism regarding the current bull run in the fourth quarter, while still hedging many of their long positions. However, as we know, big investors usually buy stocks with strong fundamentals, which is why we believe we can profit from imitating them. In this article, we are going to take a look at the smart money sentiment surrounding KNOT Offshore Partners LP (NYSE:KNOP).

KNOT Offshore Partners LP (NYSE:KNOP) was in 5 hedge funds’ portfolios at the end of the fourth quarter of 2018. KNOP investors should be aware of an increase in support from the world’s most elite money managers recently. There were 4 hedge funds in our database with KNOP holdings at the end of the previous quarter. Our calculations also showed that KNOP isn’t among the 30 most popular stocks among hedge funds.

How have hedgies been trading KNOT Offshore Partners LP (NYSE:KNOP)? 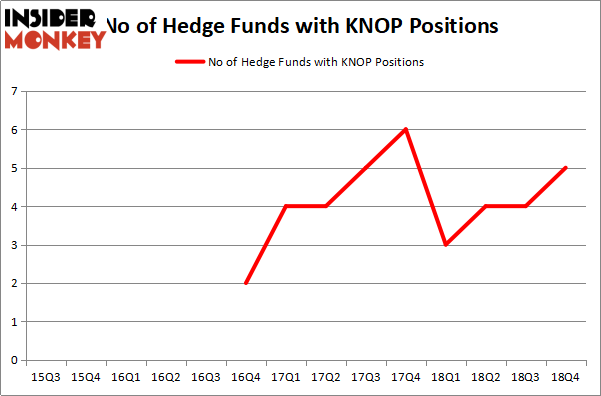 Of the funds tracked by Insider Monkey, Renaissance Technologies, managed by Jim Simons, holds the most valuable position in KNOT Offshore Partners LP (NYSE:KNOP). Renaissance Technologies has a $4.9 million position in the stock, comprising less than 0.1%% of its 13F portfolio. The second largest stake is held by McKinley Capital Management, led by Robert B. Gillam, holding a $1.4 million position; 0.1% of its 13F portfolio is allocated to the stock. Other hedge funds and institutional investors with similar optimism encompass Ken Griffin’s Citadel Investment Group, Israel Englander’s Millennium Management and Matthew Hulsizer’s PEAK6 Capital Management.

With a general bullishness amongst the heavyweights, key hedge funds were breaking ground themselves. Citadel Investment Group, managed by Ken Griffin, established the most outsized position in KNOT Offshore Partners LP (NYSE:KNOP). Citadel Investment Group had $0.5 million invested in the company at the end of the quarter. Israel Englander’s Millennium Management also initiated a $0.3 million position during the quarter.

As you can see these stocks had an average of 10.75 hedge funds with bullish positions and the average amount invested in these stocks was $27 million. That figure was $7 million in KNOP’s case. Schnitzer Steel Industries, Inc. (NASDAQ:SCHN) is the most popular stock in this table. On the other hand Huami Corporation (NYSE:HMI) is the least popular one with only 4 bullish hedge fund positions. KNOT Offshore Partners LP (NYSE:KNOP) is not the least popular stock in this group but hedge fund interest is still below average. This is a slightly negative signal and we’d rather spend our time researching stocks that hedge funds are piling on. Our calculations showed that top 15 most popular stocks) among hedge funds returned 24.2% through April 22nd and outperformed the S&P 500 ETF (SPY) by more than 7 percentage points. Unfortunately KNOP wasn’t nearly as popular as these 15 stock (hedge fund sentiment was quite bearish); KNOP investors were disappointed as the stock returned 15% and underperformed the market. If you are interested in investing in large cap stocks with huge upside potential, you should check out the top 15 most popular stocks) among hedge funds as 13 of these stocks already outperformed the market this year.