Is Kellogg Company (NYSE:K) a good place to invest some of your money right now? We can gain invaluable insight to help us answer that question by studying the investment trends of top investors, who employ world-class Ivy League graduates, who are given immense resources and industry contacts to put their financial expertise to work. The top picks of these firms have historically outperformed the market when we account for known risk factors, making them very valuable investment ideas.

Is Kellogg Company (NYSE:K) a superb stock to buy now? The smart money is getting less bullish. The number of long hedge fund positions were cut by 1 in recent months. Our calculations also showed that K isn’t among the 30 most popular stocks among hedge funds.

What have hedge funds been doing with Kellogg Company (NYSE:K)?

At Q1’s end, a total of 26 of the hedge funds tracked by Insider Monkey were long this stock, a change of -4% from the previous quarter. The graph below displays the number of hedge funds with bullish position in K over the last 15 quarters. With the smart money’s positions undergoing their usual ebb and flow, there exists a select group of notable hedge fund managers who were boosting their stakes considerably (or already accumulated large positions). 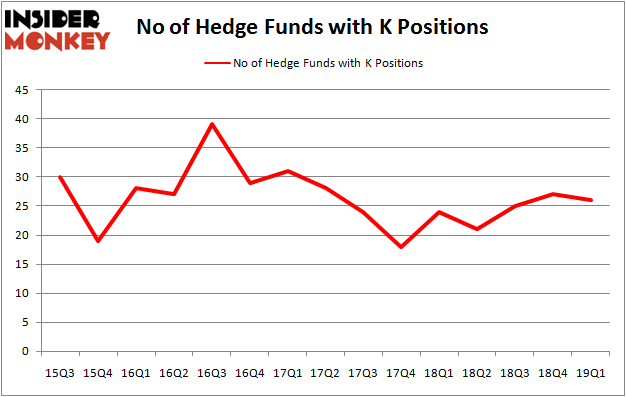 More specifically, Renaissance Technologies was the largest shareholder of Kellogg Company (NYSE:K), with a stake worth $281.2 million reported as of the end of March. Trailing Renaissance Technologies was Citadel Investment Group, which amassed a stake valued at $72.1 million. Pzena Investment Management, D E Shaw, and GAMCO Investors were also very fond of the stock, giving the stock large weights in their portfolios.

Judging by the fact that Kellogg Company (NYSE:K) has experienced falling interest from the smart money, it’s safe to say that there exists a select few hedge funds that slashed their positions entirely in the third quarter. Intriguingly, Paul Marshall and Ian Wace’s Marshall Wace LLP dropped the biggest investment of the 700 funds tracked by Insider Monkey, valued at an estimated $16.4 million in stock. Dmitry Balyasny’s fund, Balyasny Asset Management, also dropped its stock, about $1.8 million worth. These bearish behaviors are intriguing to say the least, as aggregate hedge fund interest was cut by 1 funds in the third quarter.

As you can see these stocks had an average of 28.5 hedge funds with bullish positions and the average amount invested in these stocks was $1243 million. That figure was $607 million in K’s case. Chipotle Mexican Grill, Inc. (NYSE:CMG) is the most popular stock in this table. On the other hand The Kroger Co. (NYSE:KR) is the least popular one with only 22 bullish hedge fund positions. Kellogg Company (NYSE:K) is not the least popular stock in this group but hedge fund interest is still below average. This is a slightly negative signal and we’d rather spend our time researching stocks that hedge funds are piling on. Our calculations showed that top 20 most popular stocks among hedge funds returned 1.9% in Q2 through May 30th and outperformed the S&P 500 ETF (SPY) by more than 3 percentage points. Unfortunately K wasn’t nearly as popular as these 20 stocks (hedge fund sentiment was quite bearish); K investors were disappointed as the stock returned -9.2% during the same time period and underperformed the market. If you are interested in investing in large cap stocks with huge upside potential, you should check out the top 20 most popular stocks among hedge funds as 13 of these stocks already outperformed the market so far in Q2.

Is The Hartford Financial Services Group, Inc. (HIG) A Good Stock To Buy?
Monthly Newsletter Strategy
Download a free copy of our newsletter and see the details inside!
Hedge Fund Resource Center
Related News
Kellogg Company (K): Horizon Kinetics Explains Why The Wide Moat Franchise Has Failed to Grow Is Kellogg Company (NYSE:K) A Good Stock To Buy? Hedge Funds Are Crazy About Kellogg Company (K) Why Food Stocks May Spoil in Your Portfolio in 2018 The 15 Most Popular Snack Brands in the World 11 Most Popular Snacks In The World 11 Most Ridiculous Lawsuits, Settlements, and Victories of All Time 21 Best Tinder Bio Examples for Newly Single Moms 17 Best Excuses to Get Out of Work 25 Best Bumble Bios For Girls
Billionaire Hedge Funds