Is Jagged Peak Energy Inc. (NYSE:JAG) the right investment to pursue these days? Money managers are reducing their bets on the stock. The number of long hedge fund bets went down by 5 recently. Our calculations also showed that jag isn’t among the 30 most popular stocks among hedge funds.

What does the smart money think about Jagged Peak Energy Inc. (NYSE:JAG)? 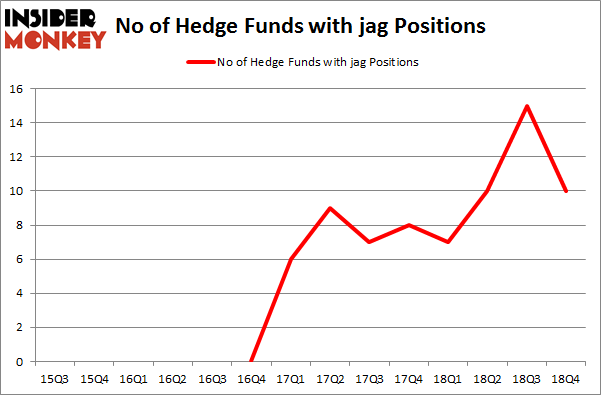 More specifically, Deep Basin Capital was the largest shareholder of Jagged Peak Energy Inc. (NYSE:JAG), with a stake worth $30.1 million reported as of the end of September. Trailing Deep Basin Capital was Citadel Investment Group, which amassed a stake valued at $18.9 million. Encompass Capital Advisors, Adage Capital Management, and GLG Partners were also very fond of the stock, giving the stock large weights in their portfolios.

Judging by the fact that Jagged Peak Energy Inc. (NYSE:JAG) has faced falling interest from hedge fund managers, logic holds that there exists a select few hedge funds who sold off their positions entirely in the third quarter. At the top of the heap, Paul Marshall and Ian Wace’s Marshall Wace LLP dumped the largest investment of all the hedgies watched by Insider Monkey, valued at about $13.9 million in stock. Mike Vranos’s fund, Ellington, also said goodbye to its stock, about $0.9 million worth. These moves are interesting, as aggregate hedge fund interest dropped by 5 funds in the third quarter.

As you can see these stocks had an average of 17.5 hedge funds with bullish positions and the average amount invested in these stocks was $217 million. That figure was $84 million in JAG’s case. SeaWorld Entertainment Inc (NYSE:SEAS) is the most popular stock in this table. On the other hand Acadia Realty Trust (NYSE:AKR) is the least popular one with only 11 bullish hedge fund positions. Compared to these stocks Jagged Peak Energy Inc. (NYSE:JAG) is even less popular than AKR. Our calculations showed that top 15 most popular stocks) among hedge funds returned 24.2% through April 22nd and outperformed the S&P 500 ETF (SPY) by more than 7 percentage points. A small number of hedge funds were also right about betting on JAG, though not to the same extent, as the stock returned 22.9% and outperformed the market as well.