The elite funds run by legendary investors such as David Tepper and Dan Loeb make hundreds of millions of dollars for themselves and their investors by spending enormous resources doing research on small cap stocks that big investment banks don’t follow. Because of their pay structures, they have strong incentives to do the research necessary to beat the market. That’s why we pay close attention to what they think in small cap stocks. In this article, we take a closer look at Intra-Cellular Therapies Inc (NASDAQ:ITCI) from the perspective of those elite funds.

Is Intra-Cellular Therapies Inc (NASDAQ:ITCI) worth your attention right now? The smart money is in a bearish mood. The number of bullish hedge fund positions dropped by 1 lately. Our calculations also showed that ITCI isn’t among the 30 most popular stocks among hedge funds. ITCI was in 15 hedge funds’ portfolios at the end of the fourth quarter of 2018. There were 16 hedge funds in our database with ITCI holdings at the end of the previous quarter. 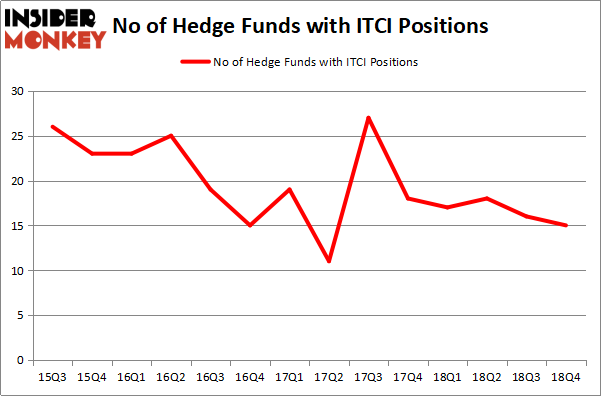 The largest stake in Intra-Cellular Therapies Inc (NASDAQ:ITCI) was held by Samlyn Capital, which reported holding $14.4 million worth of stock at the end of December. It was followed by Citadel Investment Group with a $11.9 million position. Other investors bullish on the company included Millennium Management, Columbus Circle Investors, and Point72 Asset Management.

Because Intra-Cellular Therapies Inc (NASDAQ:ITCI) has faced declining sentiment from the smart money, logic holds that there were a few hedge funds that elected to cut their full holdings in the third quarter. It’s worth mentioning that Dmitry Balyasny’s Balyasny Asset Management dropped the biggest position of the 700 funds followed by Insider Monkey, valued at about $11 million in stock. Stanley Druckenmiller’s fund, Duquesne Capital, also said goodbye to its stock, about $6.4 million worth. These transactions are intriguing to say the least, as total hedge fund interest was cut by 1 funds in the third quarter.