The government requires hedge funds and wealthy investors that crossed the $100 million equity holdings threshold are required to file a report that shows their positions at the end of every quarter. Even though it isn’t the intention, these filings level the playing field for ordinary investors. The latest round of 13F filings disclosed the funds’ positions on December 31. We at Insider Monkey have made an extensive database of nearly 750 of those elite funds and prominent investors’ filings. In this article, we analyze how these elite funds and prominent investors traded Interpublic Group of Companies Inc (NYSE:IPG) based on those filings.

Interpublic Group of Companies Inc (NYSE:IPG) investors should be aware of an increase in enthusiasm from smart money in recent months. Our calculations also showed that IPG isn’t among the 30 most popular stocks among hedge funds. 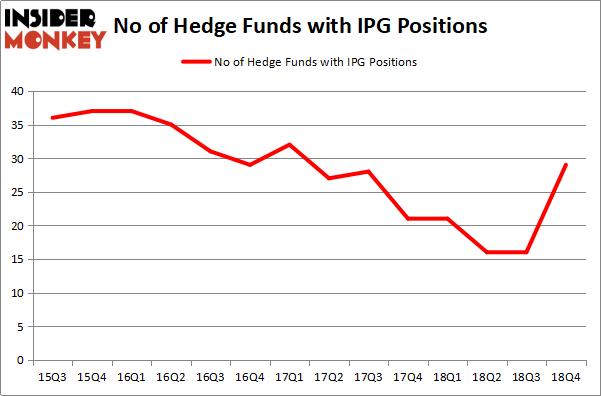 According to publicly available hedge fund and institutional investor holdings data compiled by Insider Monkey, Pzena Investment Management, managed by Richard S. Pzena, holds the most valuable position in Interpublic Group of Companies Inc (NYSE:IPG). Pzena Investment Management has a $332.1 million position in the stock, comprising 1.9% of its 13F portfolio. The second largest stake is held by John W. Rogers of Ariel Investments, with a $132.7 million position; 1.8% of its 13F portfolio is allocated to the company. Some other members of the smart money with similar optimism encompass Israel Englander’s Millennium Management, Mario Gabelli’s GAMCO Investors and Jim Simons’s Renaissance Technologies.

As one would reasonably expect, key hedge funds have jumped into Interpublic Group of Companies Inc (NYSE:IPG) headfirst. Renaissance Technologies, managed by Jim Simons, assembled the most valuable position in Interpublic Group of Companies Inc (NYSE:IPG). Renaissance Technologies had $26.1 million invested in the company at the end of the quarter. Phill Gross and Robert Atchinson’s Adage Capital Management also made a $9.8 million investment in the stock during the quarter. The following funds were also among the new IPG investors: Paul Marshall and Ian Wace’s Marshall Wace LLP, Cliff Asness’s AQR Capital Management, and Matthew Tewksbury’s Stevens Capital Management.

As you can see these stocks had an average of 19.75 hedge funds with bullish positions and the average amount invested in these stocks was $217 million. That figure was $722 million in IPG’s case. Packaging Corporation Of America (NYSE:PKG) is the most popular stock in this table. On the other hand China Eastern Airlines Corp. Ltd. (NYSE:CEA) is the least popular one with only 2 bullish hedge fund positions. Interpublic Group of Companies Inc (NYSE:IPG) is not the most popular stock in this group but hedge fund interest is still above average. This is a slightly positive signal but we’d rather spend our time researching stocks that hedge funds are piling on. Our calculations showed that top 15 most popular stocks among hedge funds returned 21.3% through April 8th and outperformed the S&P 500 ETF (SPY) by more than 5 percentage points. Unfortunately IPG wasn’t in this group. Hedge funds that bet on IPG were disappointed as the stock returned 5.4% and underperformed the market. If you are interested in investing in large cap stocks, you should check out the top 15 hedge fund stocks as 12 of these outperformed the market.