Insider Monkey finished processing more than 700 13F filings submitted by hedge funds and prominent investors. These filings show these funds’ portfolio positions as of December 31st, 2018. In this article we are going to take a look at smart money sentiment towards International Money Express, Inc. (NASDAQ:IMXI).

Is International Money Express, Inc. (NASDAQ:IMXI) a buy right now? Hedge funds are in a bearish mood. The number of bullish hedge fund bets shrunk by 1 lately. Our calculations also showed that IMXI isn’t among the 30 most popular stocks among hedge funds.

At the end of the fourth quarter, a total of 10 of the hedge funds tracked by Insider Monkey were bullish on this stock, a change of -9% from the previous quarter. Below, you can check out the change in hedge fund sentiment towards IMXI over the last 14 quarters. With the smart money’s capital changing hands, there exists an “upper tier” of key hedge fund managers who were upping their holdings substantially (or already accumulated large positions). 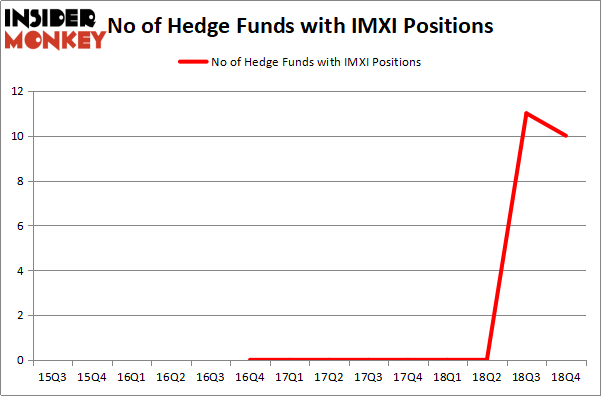 Among these funds, Nantahala Capital Management held the most valuable stake in International Money Express, Inc. (NASDAQ:IMXI), which was worth $26 million at the end of the fourth quarter. On the second spot was Headlands Capital which amassed $13.3 million worth of shares. Moreover, Angelo Gordon & Co, Granite Point Capital, and BlueCrest Capital Mgmt. were also bullish on International Money Express, Inc. (NASDAQ:IMXI), allocating a large percentage of their portfolios to this stock.

Seeing as International Money Express, Inc. (NASDAQ:IMXI) has faced bearish sentiment from the aggregate hedge fund industry, it’s safe to say that there exists a select few funds that decided to sell off their positions entirely last quarter. Intriguingly, John M. Angelo and Michael L. Gordon’s Angelo Gordon & Co cut the largest stake of the 700 funds tracked by Insider Monkey, worth an estimated $6 million in stock. Michael Platt and William Reeves’s fund, BlueCrest Capital Mgmt., also said goodbye to its stock, about $2.9 million worth. These moves are important to note, as aggregate hedge fund interest dropped by 1 funds last quarter.

As you can see these stocks had an average of 9.25 hedge funds with bullish positions and the average amount invested in these stocks was $78 million. That figure was $62 million in IMXI’s case. Sentinel Energy Services Inc. (NASDAQ:STNL) is the most popular stock in this table. On the other hand Green Plains Partners LP (NASDAQ:GPP) is the least popular one with only 2 bullish hedge fund positions. International Money Express, Inc. (NASDAQ:IMXI) is not the most popular stock in this group but hedge fund interest is still above average. This is a slightly positive signal but we’d rather spend our time researching stocks that hedge funds are piling on. Our calculations showed that top 15 most popular stocks) among hedge funds returned 24.2% through April 22nd and outperformed the S&P 500 ETF (SPY) by more than 7 percentage points. Unfortunately IMXI wasn’t nearly as popular as these 15 stock and hedge funds that were betting on IMXI were disappointed as the stock returned 0.3% and underperformed the market. If you are interested in investing in large cap stocks with huge upside potential, you should check out the top 15 most popular stocks) among hedge funds as 13 of these stocks already outperformed the market this year.