Ingredion Inc (NYSE:INGR) shares haven’t seen a lot of action during the third quarter. Overall, hedge fund sentiment was unchanged. The stock was in 21 hedge funds’ portfolios at the end of December. At the end of this article we will also compare INGR to other stocks including Bausch Health Companies (NYSE:BHC), AMERCO (NASDAQ:UHAL), and Unum Group (NYSE:UNM) to get a better sense of its popularity.

In the financial world there are tons of tools shareholders have at their disposal to evaluate their stock investments. A pair of the most innovative tools are hedge fund and insider trading sentiment. We have shown that, historically, those who follow the best picks of the elite investment managers can trounce the market by a superb margin (see the details here).

At Q4’s end, a total of 21 of the hedge funds tracked by Insider Monkey were bullish on this stock, a change of 0% from the second quarter of 2018. By comparison, 20 hedge funds held shares or bullish call options in INGR a year ago. With hedge funds’ sentiment swirling, there exists an “upper tier” of noteworthy hedge fund managers who were boosting their holdings considerably (or already accumulated large positions). 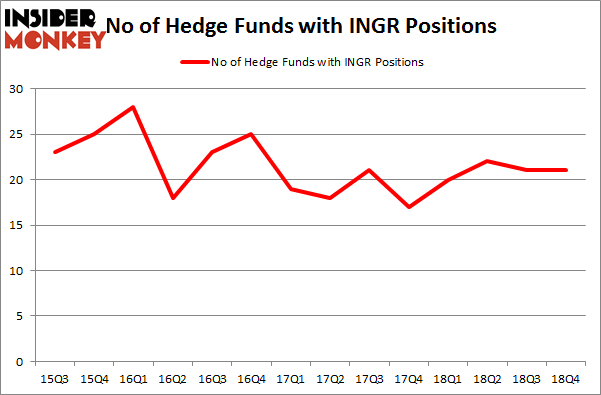 Judging by the fact that Ingredion Inc (NYSE:INGR) has faced declining sentiment from hedge fund managers, it’s safe to say that there is a sect of funds that elected to cut their full holdings last quarter. At the top of the heap, Ian Simm’s Impax Asset Management sold off the largest investment of the 700 funds tracked by Insider Monkey, totaling an estimated $2.6 million in stock, and Peter Rathjens, Bruce Clarke and John Campbell’s Arrowstreet Capital was right behind this move, as the fund sold off about $2.1 million worth. These moves are interesting, as total hedge fund interest stayed the same (this is a bearish signal in our experience).

As you can see these stocks had an average of 24.5 hedge funds with bullish positions and the average amount invested in these stocks was $641 million. That figure was $236 million in INGR’s case. KAR Auction Services Inc (NYSE:KAR) is the most popular stock in this table. On the other hand AMERCO (NASDAQ:UHAL) is the least popular one with only 7 bullish hedge fund positions. Ingredion Inc (NYSE:INGR) is not the least popular stock in this group but hedge fund interest is still below average. This is a slightly negative signal and we’d rather spend our time researching stocks that hedge funds are piling on. Our calculations showed that top 15 most popular stocks among hedge funds returned 21.3% through April 8th and outperformed the S&P 500 ETF (SPY) by more than 5 percentage points. Unfortunately INGR wasn’t in this group. Hedge funds that bet on INGR were disappointed as the stock returned 4.1% and underperformed the market. If you are interested in investing in large cap stocks, you should check out the top 15 hedge fund stocks as 12 of these outperformed the market.