Is Ingevity Corporation (NYSE:NGVT) a good place to invest some of your money right now? We can gain invaluable insight to help us answer that question by studying the investment trends of top investors, who employ world-class Ivy League graduates, who are given immense resources and industry contacts to put their financial expertise to work. The top picks of these firms have historically outperformed the market when we account for known risk factors, making them very valuable investment ideas.

Ingevity Corporation (NYSE:NGVT) investors should be aware of a decrease in hedge fund interest in recent months. NGVT was in 20 hedge funds’ portfolios at the end of the third quarter of 2019. There were 21 hedge funds in our database with NGVT holdings at the end of the previous quarter. Our calculations also showed that NGVT isn’t among the 30 most popular stocks among hedge funds (click for Q3 rankings and see the video below for Q2 rankings).

In the financial world there are many formulas market participants use to appraise stocks. A pair of the best formulas are hedge fund and insider trading sentiment. Our researchers have shown that, historically, those who follow the best picks of the top investment managers can outpace the market by a superb margin (see the details here).

Unlike the largest US hedge funds that are convinced Dow will soar past 40,000 or the world’s most bearish hedge fund that’s more convinced than ever that a crash is coming, our long-short investment strategy doesn’t rely on bull or bear markets to deliver double digit returns. We only rely on the best performing hedge funds‘ buy/sell signals. We’re going to go over the recent hedge fund action surrounding Ingevity Corporation (NYSE:NGVT).

How have hedgies been trading Ingevity Corporation (NYSE:NGVT)? 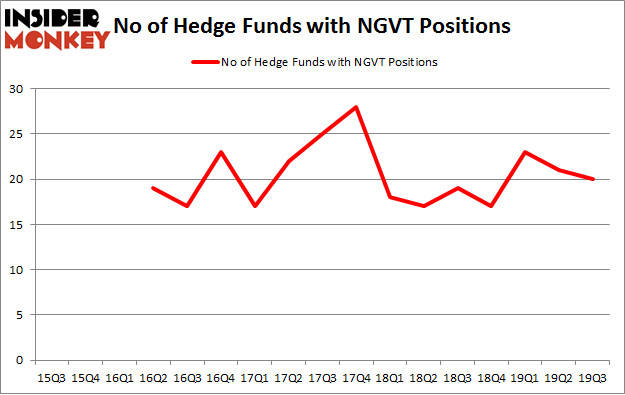 Among these funds, Chilton Investment Company held the most valuable stake in Ingevity Corporation (NYSE:NGVT), which was worth $55.3 million at the end of the third quarter. On the second spot was Broad Bay Capital which amassed $34.4 million worth of shares. Adage Capital Management, Millennium Management, and Royce & Associates were also very fond of the stock, becoming one of the largest hedge fund holders of the company. In terms of the portfolio weights assigned to each position Broad Bay Capital allocated the biggest weight to Ingevity Corporation (NYSE:NGVT), around 9.2% of its 13F portfolio. Chilton Investment Company is also relatively very bullish on the stock, designating 1.85 percent of its 13F equity portfolio to NGVT.

Seeing as Ingevity Corporation (NYSE:NGVT) has witnessed declining sentiment from the aggregate hedge fund industry, it’s easy to see that there were a few hedgies that elected to cut their positions entirely last quarter. Intriguingly, Dmitry Balyasny’s Balyasny Asset Management dropped the largest stake of all the hedgies followed by Insider Monkey, totaling close to $20.9 million in stock. Principal Global Investors’s fund, Columbus Circle Investors, also dumped its stock, about $16.6 million worth. These transactions are interesting, as aggregate hedge fund interest dropped by 1 funds last quarter.

As you can see these stocks had an average of 22.25 hedge funds with bullish positions and the average amount invested in these stocks was $396 million. That figure was $144 million in NGVT’s case. GW Pharmaceuticals plc (NASDAQ:GWPH) is the most popular stock in this table. On the other hand Graham Holdings Company (NYSE:GHC) is the least popular one with only 17 bullish hedge fund positions. Ingevity Corporation (NYSE:NGVT) is not the least popular stock in this group but hedge fund interest is still below average. Our calculations showed that top 20 most popular stocks among hedge funds returned 37.4% in 2019 through the end of November and outperformed the S&P 500 ETF (SPY) by 9.9 percentage points. A small number of hedge funds were also right about betting on NGVT, though not to the same extent, as the stock returned 6.4% during the first two months of the fourth quarter and outperformed the market.