Is InfraREIT Inc (NYSE:HIFR) a good investment right now? We check hedge fund and billionaire investor sentiment before delving into hours of research. Hedge funds spend millions of dollars on Ivy League graduates, expert networks, and get tips from investment bankers and industry insiders. Sure they sometimes fail miserably but historically their consensus stock picks outperformed the market after adjusting for known risk factors.

Is InfraREIT Inc (NYSE:HIFR) a good stock to buy now? The smart money is turning bullish. The number of bullish hedge fund bets rose by 1 in recent months. Our calculations also showed that HIFR isn’t among the 30 most popular stocks among hedge funds. HIFR was in 15 hedge funds’ portfolios at the end of December. There were 14 hedge funds in our database with HIFR holdings at the end of the previous quarter.

To the average investor there are a lot of signals investors can use to size up stocks. A pair of the most under-the-radar signals are hedge fund and insider trading moves. Our experts have shown that, historically, those who follow the top picks of the best fund managers can beat the S&P 500 by a significant margin (see the details here). 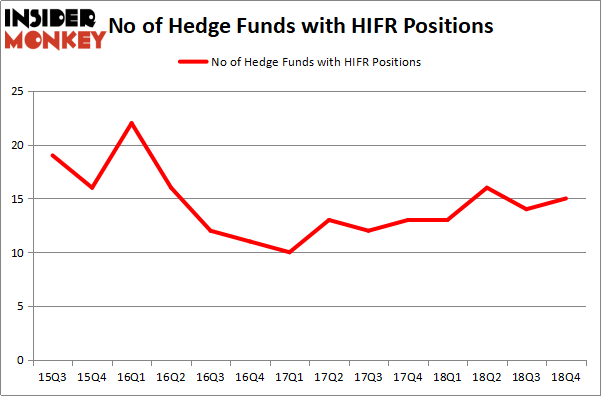 Among these funds, Alpine Associates held the most valuable stake in InfraREIT Inc (NYSE:HIFR), which was worth $44.8 million at the end of the fourth quarter. On the second spot was Magnetar Capital which amassed $43.7 million worth of shares. Moreover, Sand Grove Capital Partners, Water Island Capital, and GLG Partners were also bullish on InfraREIT Inc (NYSE:HIFR), allocating a large percentage of their portfolios to this stock.

With a general bullishness amongst the heavyweights, key money managers were breaking ground themselves. Alpine Associates, managed by Robert Emil Zoellner, established the most valuable position in InfraREIT Inc (NYSE:HIFR). Alpine Associates had $44.8 million invested in the company at the end of the quarter. Alec Litowitz and Ross Laser’s Magnetar Capital also initiated a $43.7 million position during the quarter. The following funds were also among the new HIFR investors: Simon Davies’s Sand Grove Capital Partners, John Orrico’s Water Island Capital, and Daniel Arbess’s Perella Weinberg Partners.

As you can see these stocks had an average of 12 hedge funds with bullish positions and the average amount invested in these stocks was $91 million. That figure was $197 million in HIFR’s case. PGT Innovations Inc. (NYSE:PGTI) is the most popular stock in this table. On the other hand GasLog Partners LP (NYSE:GLOP) is the least popular one with only 7 bullish hedge fund positions. InfraREIT Inc (NYSE:HIFR) is not the most popular stock in this group but hedge fund interest is still above average. This is a slightly positive signal but we’d rather spend our time researching stocks that hedge funds are piling on. Our calculations showed that top 15 most popular stocks) among hedge funds returned 24.2% through April 22nd and outperformed the S&P 500 ETF (SPY) by more than 7 percentage points. Unfortunately HIFR wasn’t nearly as popular as these 15 stock and hedge funds that were betting on HIFR were disappointed as the stock returned 1.3% and underperformed the market. If you are interested in investing in large cap stocks with huge upside potential, you should check out the top 15 most popular stocks) among hedge funds as 13 of these stocks already outperformed the market this year.