Concerns over rising interest rates and expected further rate increases have hit several stocks hard during the fourth quarter of 2018. Trends reversed 180 degrees during the first half of 2019 amid Powell’s pivot and optimistic expectations towards a trade deal with China. Hedge funds and institutional investors tracked by Insider Monkey usually invest a disproportionate amount of their portfolios in smaller cap stocks. We have been receiving indications that hedge funds were increasing their overall exposure in the second quarter and this is one of the factors behind the recent movements in major indices. In this article, we will take a closer look at hedge fund sentiment towards Independent Bank Group Inc (NASDAQ:IBTX).

Independent Bank Group Inc (NASDAQ:IBTX) was in 9 hedge funds’ portfolios at the end of the second quarter of 2019. IBTX investors should be aware of a decrease in enthusiasm from smart money lately. There were 10 hedge funds in our database with IBTX positions at the end of the previous quarter. Our calculations also showed that IBTX isn’t among the 30 most popular stocks among hedge funds (view the video below).

According to most traders, hedge funds are seen as worthless, outdated financial tools of yesteryear. While there are over 8000 funds with their doors open at the moment, Our researchers hone in on the bigwigs of this club, about 750 funds. These hedge fund managers oversee the majority of all hedge funds’ total asset base, and by tailing their matchless investments, Insider Monkey has revealed numerous investment strategies that have historically outpaced the S&P 500 index. Insider Monkey’s flagship hedge fund strategy outstripped the S&P 500 index by around 5 percentage points per year since its inception in May 2014. We were able to generate large returns even by identifying short candidates. Our portfolio of short stocks lost 25.7% since February 2017 (through September 30th) even though the market was up more than 33% during the same period. We just shared a list of 10 short targets in our latest quarterly update .

What have hedge funds been doing with Independent Bank Group Inc (NASDAQ:IBTX)? 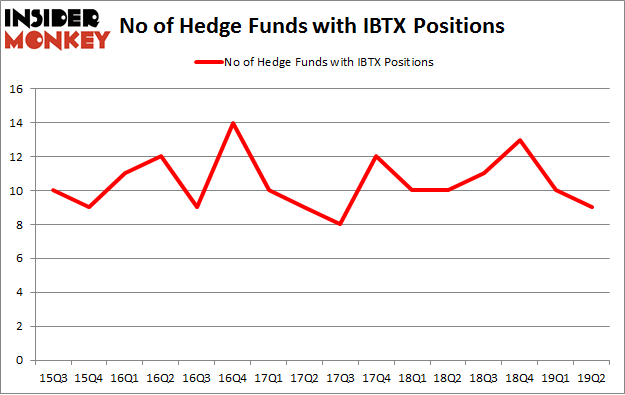 Of the funds tracked by Insider Monkey, Anton Schutz’s Mendon Capital Advisors has the number one position in Independent Bank Group Inc (NASDAQ:IBTX), worth close to $23.3 million, corresponding to 3.6% of its total 13F portfolio. Coming in second is Renaissance Technologies, with a $14.9 million position; less than 0.1%% of its 13F portfolio is allocated to the company. Remaining members of the smart money that are bullish comprise Fred Cummings’s Elizabeth Park Capital Management, Chuck Royce’s Royce & Associates and Mark Lee’s Forest Hill Capital.

We view hedge fund activity in the stock unfavorable, but in this case there was only a single hedge fund selling its entire position: SCW Capital Management. One hedge fund selling its entire position doesn’t always imply a bearish intent. Theoretically a hedge fund may decide to sell a promising position in order to invest the proceeds in a more promising idea. However, we don’t think this is the case in this case because none of the 750+ hedge funds tracked by Insider Monkey identified IBTX as a viable investment and initiated a position in the stock.

Let’s check out hedge fund activity in other stocks – not necessarily in the same industry as Independent Bank Group Inc (NASDAQ:IBTX) but similarly valued. We will take a look at CoreCivic, Inc. (NYSE:CXW), Kosmos Energy Ltd (NYSE:KOS), Xenia Hotels & Resorts Inc (NYSE:XHR), and Seritage Growth Properties (NYSE:SRG). All of these stocks’ market caps are closest to IBTX’s market cap.

As you can see these stocks had an average of 16.25 hedge funds with bullish positions and the average amount invested in these stocks was $215 million. That figure was $95 million in IBTX’s case. Kosmos Energy Ltd (NYSE:KOS) is the most popular stock in this table. On the other hand Xenia Hotels & Resorts Inc (NYSE:XHR) is the least popular one with only 12 bullish hedge fund positions. Compared to these stocks Independent Bank Group Inc (NASDAQ:IBTX) is even less popular than XHR. Hedge funds dodged a bullet by taking a bearish stance towards IBTX. Our calculations showed that the top 20 most popular hedge fund stocks returned 24.4% in 2019 through September 30th and outperformed the S&P 500 ETF (SPY) by 4 percentage points. Unfortunately IBTX wasn’t nearly as popular as these 20 stocks (hedge fund sentiment was very bearish); IBTX investors were disappointed as the stock returned -3.8% during the third quarter and underperformed the market. If you are interested in investing in large cap stocks with huge upside potential, you should check out the top 20 most popular stocks among hedge funds as many of these stocks already outperformed the market so far in 2019.