Is IAC/InterActiveCorp (NASDAQ:IAC) a good stock to buy right now? We at Insider Monkey like to examine what billionaires and hedge funds think of a company before doing days of research on it. Given their 2 and 20 payment structure, hedge funds have more incentives and resources than the average investor. The funds have access to expert networks and get tips from industry insiders. They also have numerous Ivy League graduates and MBAs. Like everyone else, hedge funds perform miserably at times, but their consensus picks have historically outperformed the market after risk adjustments.

Is IAC/InterActiveCorp (NASDAQ:IAC) going to take off soon? The smart money is getting less optimistic. The number of long hedge fund positions fell by 1 lately. Our calculations also showed that IAC isn’t among the 30 most popular stocks among hedge funds. IAC was in 50 hedge funds’ portfolios at the end of the fourth quarter of 2018. There were 51 hedge funds in our database with IAC holdings at the end of the previous quarter.

What have hedge funds been doing with IAC/InterActiveCorp (NASDAQ:IAC)?

At Q4’s end, a total of 50 of the hedge funds tracked by Insider Monkey were long this stock, a change of -2% from the second quarter of 2018. On the other hand, there were a total of 51 hedge funds with a bullish position in IAC a year ago. With the smart money’s positions undergoing their usual ebb and flow, there exists an “upper tier” of notable hedge fund managers who were upping their stakes substantially (or already accumulated large positions). 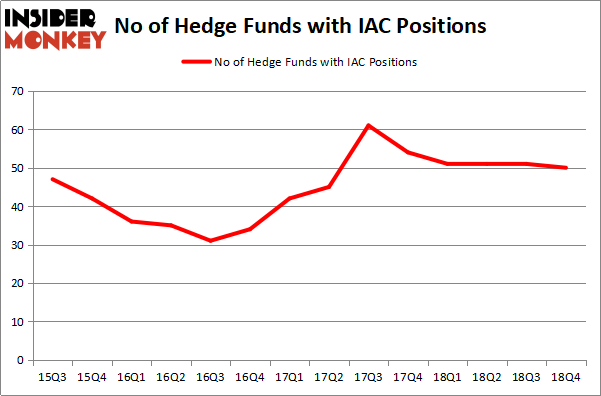 Among these funds, AQR Capital Management held the most valuable stake in IAC/InterActiveCorp (NASDAQ:IAC), which was worth $251.3 million at the end of the third quarter. On the second spot was Marcato Capital Management which amassed $179.7 million worth of shares. Moreover, Aristeia Capital, Luxor Capital Group, and Millennium Management were also bullish on IAC/InterActiveCorp (NASDAQ:IAC), allocating a large percentage of their portfolios to this stock.

Due to the fact that IAC/InterActiveCorp (NASDAQ:IAC) has faced declining sentiment from the smart money, it’s easy to see that there exists a select few hedgies who sold off their positions entirely in the third quarter. Interestingly, David Einhorn’s Greenlight Capital dropped the largest stake of all the hedgies tracked by Insider Monkey, valued at close to $94.3 million in stock, and Doug Silverman and Alexander Klabin’s Senator Investment Group was right behind this move, as the fund dumped about $92.1 million worth. These bearish behaviors are interesting, as total hedge fund interest fell by 1 funds in the third quarter.

As you can see these stocks had an average of 32.25 hedge funds with bullish positions and the average amount invested in these stocks was $1946 million. That figure was $1928 million in IAC’s case. Cheniere Energy, Inc. (NYSEAMEX:LNG) is the most popular stock in this table. On the other hand CGI Inc. (NYSE:GIB) is the least popular one with only 17 bullish hedge fund positions. Compared to these stocks IAC/InterActiveCorp (NASDAQ:IAC) is more popular among hedge funds. Considering that hedge funds are fond of this stock in relation to its market cap peers, it may be a good idea to analyze it in detail and potentially include it in your portfolio. Our calculations showed that top 15 most popular stocks among hedge funds returned 19.7% through March 15th and outperformed the S&P 500 ETF (SPY) by 6.6 percentage points. Hedge funds were also right about betting on IAC, though not to the same extent, as the stock returned 14.8% and outperformed the market as well.

Do Hedge Funds Love CenturyLink, Inc. (NYSE:CTL)?
Monthly Newsletter Strategy
Download a free copy of our newsletter and see the details inside!
Hedge Fund Resource Center
Related News
Brenham Capital Management and Brenner West Capital Partners Are Closing; Will These Stocks Drop? IAC/InterActiveCorp (IAC): Hedge Fund Sentiment Unchanged IAC/InterActiveCorp (IAC): Hedge Funds Think It’s A Perfect Match for Their Portfolios 25 Stocks Billionaires Are Piling On IAC/InterActiveCorp (NASDAQ:IAC): Why Maran Capital Finds It Attractive 3 Blockchain Dating Apps Vying to Change the Game for Tinder and the Rest 36 Fresh Stories Telling How Is It Going In The Finance World Today? Hedge Funds Have Never Been This Bullish On Visa Inc (V) Ten of the Most Common Addictions 13 African Countries with the Largest White Population in 2018
Billionaire Hedge Funds