Is Hudson Pacific Properties Inc (NYSE:HPP) a buy, sell, or hold? Money managers are in a pessimistic mood. The number of long hedge fund positions fell by 1 in recent months. Our calculations also showed that HPP isn’t among the 30 most popular stocks among hedge funds. HPP was in 12 hedge funds’ portfolios at the end of the fourth quarter of 2018. There were 13 hedge funds in our database with HPP positions at the end of the previous quarter.

At the end of the fourth quarter, a total of 12 of the hedge funds tracked by Insider Monkey were bullish on this stock, a change of -8% from one quarter earlier. By comparison, 16 hedge funds held shares or bullish call options in HPP a year ago. With hedgies’ capital changing hands, there exists a few noteworthy hedge fund managers who were upping their stakes considerably (or already accumulated large positions). 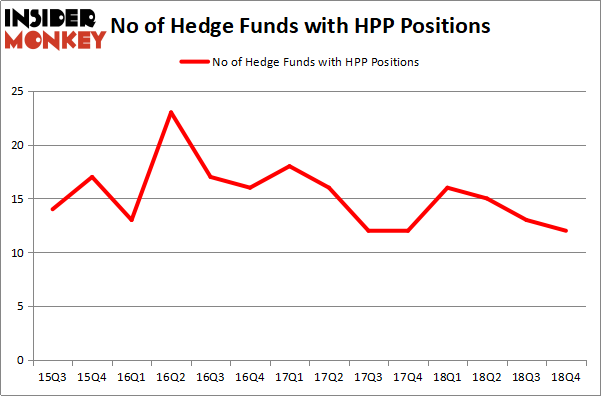 Among these funds, Long Pond Capital held the most valuable stake in Hudson Pacific Properties Inc (NYSE:HPP), which was worth $174.9 million at the end of the third quarter. On the second spot was Renaissance Technologies which amassed $58.3 million worth of shares. Moreover, Balyasny Asset Management, Zimmer Partners, and D E Shaw were also bullish on Hudson Pacific Properties Inc (NYSE:HPP), allocating a large percentage of their portfolios to this stock.

Since Hudson Pacific Properties Inc (NYSE:HPP) has faced declining sentiment from the aggregate hedge fund industry, we can see that there were a few money managers that slashed their entire stakes by the end of the third quarter. Intriguingly, Paul Marshall and Ian Wace’s Marshall Wace LLP cut the biggest investment of all the hedgies tracked by Insider Monkey, totaling an estimated $3.7 million in stock, and Glenn Russell Dubin’s Highbridge Capital Management was right behind this move, as the fund said goodbye to about $2.9 million worth. These moves are important to note, as aggregate hedge fund interest fell by 1 funds by the end of the third quarter.

As you can see these stocks had an average of 28 hedge funds with bullish positions and the average amount invested in these stocks was $751 million. That figure was $361 million in HPP’s case. Caesars Entertainment Corp (NASDAQ:CZR) is the most popular stock in this table. On the other hand Banco de Chile (NYSE:BCH) is the least popular one with only 4 bullish hedge fund positions. Hudson Pacific Properties Inc (NYSE:HPP) is not the least popular stock in this group but hedge fund interest is still below average. Our calculations showed that top 15 most popular stocks) among hedge funds returned 24.2% through April 22nd and outperformed the S&P 500 ETF (SPY) by more than 7 percentage points. A small number of hedge funds were also right about betting on HPP, though not to the same extent, as the stock returned 17.6% and outperformed the market as well.