Is Hostess Brands, Inc. (NASDAQ:TWNK) the right pick for your portfolio? The best stock pickers are turning bullish. The number of bullish hedge fund bets increased by 2 in recent months. Our calculations also showed that TWNK isn’t among the 30 most popular stocks among hedge funds (see the video below). TWNK was in 26 hedge funds’ portfolios at the end of the second quarter of 2019. There were 24 hedge funds in our database with TWNK positions at the end of the previous quarter.

To most stock holders, hedge funds are viewed as slow, old financial tools of years past. While there are more than 8000 funds with their doors open at the moment, Our researchers hone in on the elite of this group, approximately 750 funds. These hedge fund managers preside over the majority of the hedge fund industry’s total asset base, and by following their unrivaled picks, Insider Monkey has unsheathed several investment strategies that have historically outperformed the market. Insider Monkey’s flagship hedge fund strategy beat the S&P 500 index by around 5 percentage points per annum since its inception in May 2014. We were able to generate large returns even by identifying short candidates. Our portfolio of short stocks lost 25.7% since February 2017 (through September 30th) even though the market was up more than 33% during the same period. We just shared a list of 10 short targets in our latest quarterly update . 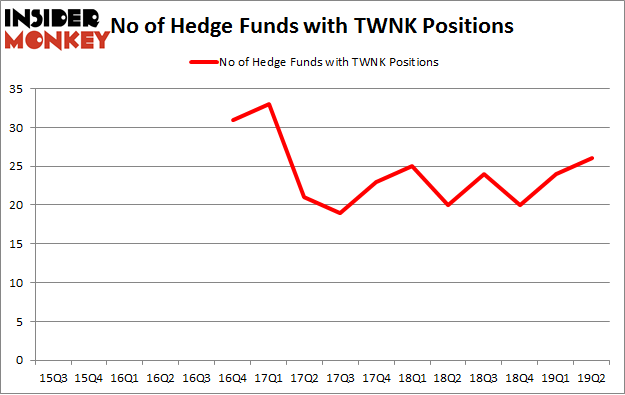 More specifically, Cardinal Capital was the largest shareholder of Hostess Brands, Inc. (NASDAQ:TWNK), with a stake worth $76.6 million reported as of the end of March. Trailing Cardinal Capital was Millennium Management, which amassed a stake valued at $65.4 million. Balyasny Asset Management, D E Shaw, and Marshall Wace LLP were also very fond of the stock, giving the stock large weights in their portfolios.

As you can see these stocks had an average of 13 hedge funds with bullish positions and the average amount invested in these stocks was $106 million. That figure was $283 million in TWNK’s case. Fabrinet (NYSE:FN) is the most popular stock in this table. On the other hand NGL Energy Partners LP (NYSE:NGL) is the least popular one with only 4 bullish hedge fund positions. Compared to these stocks Hostess Brands, Inc. (NASDAQ:TWNK) is more popular among hedge funds. Our calculations showed that top 20 most popular stocks among hedge funds returned 24.4% in 2019 through September 30th and outperformed the S&P 500 ETF (SPY) by 4 percentage points. Unfortunately TWNK wasn’t nearly as popular as these 20 stocks and hedge funds that were betting on TWNK were disappointed as the stock returned -3.2% during the third quarter and underperformed the market. If you are interested in investing in large cap stocks with huge upside potential, you should check out the top 20 most popular stocks among hedge funds as many of these stocks already outperformed the market in Q3.