Does Horizon Therapeutics Public Limited Company (NASDAQ:HZNP) represent a good buying opportunity at the moment? Let’s quickly check the hedge fund interest towards the company. Hedge fund firms constantly search out bright intellectuals and highly-experienced employees and throw away millions of dollars on satellite photos and other research activities, so it is no wonder why they tend to generate millions in profits each year. It is also true that some hedge fund players fail inconceivably on some occasions, but net net their stock picks have been generating superior risk-adjusted returns on average over the years.

Is Horizon Therapeutics Public Limited Company (NASDAQ:HZNP) a buy, sell, or hold? The smart money is in a bullish mood. The number of bullish hedge fund bets advanced by 13 recently. Our calculations also showed that hznp isn’t among the 30 most popular stocks among hedge funds.

To the average investor there are tons of indicators investors employ to evaluate publicly traded companies. A couple of the best indicators are hedge fund and insider trading moves. We have shown that, historically, those who follow the top picks of the elite fund managers can outpace the market by a significant margin (see the details here).

What does the smart money think about Horizon Therapeutics Public Limited Company (NASDAQ:HZNP)? 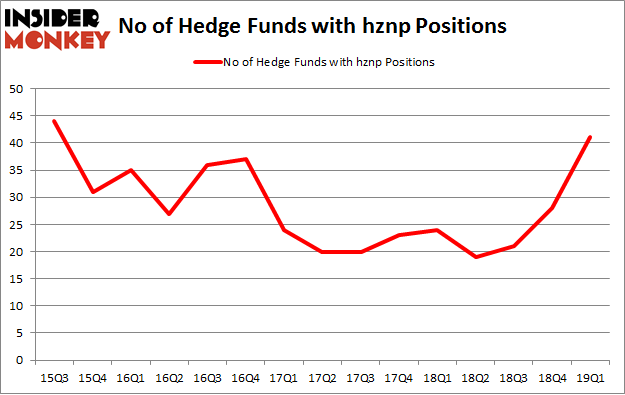 More specifically, Scopia Capital was the largest shareholder of Horizon Therapeutics Public Limited Company (NASDAQ:HZNP), with a stake worth $215.6 million reported as of the end of March. Trailing Scopia Capital was Renaissance Technologies, which amassed a stake valued at $207.7 million. Paulson & Co, Deerfield Management, and D E Shaw were also very fond of the stock, giving the stock large weights in their portfolios.

As one would reasonably expect, some big names have been driving this bullishness. Healthcor Management LP, managed by Arthur B Cohen and Joseph Healey, initiated the largest position in Horizon Therapeutics Public Limited Company (NASDAQ:HZNP). Healthcor Management LP had $52.6 million invested in the company at the end of the quarter. Brian Ashford-Russell and Tim Woolley’s Polar Capital also initiated a $51.4 million position during the quarter. The other funds with new positions in the stock are Principal Global Investors’s Columbus Circle Investors, Nick Niell’s Arrowgrass Capital Partners, and Michael A. Price and Amos Meron’s Empyrean Capital Partners.

As you can see these stocks had an average of 17.25 hedge funds with bullish positions and the average amount invested in these stocks was $242 million. That figure was $1304 million in HZNP’s case. Globus Medical Inc (NYSE:GMED) is the most popular stock in this table. On the other hand Grupo Aeroportuario del Sureste, S. A. B. de C. V. (NYSE:ASR) is the least popular one with only 8 bullish hedge fund positions. Compared to these stocks Horizon Therapeutics Public Limited Company (NASDAQ:HZNP) is more popular among hedge funds. Our calculations showed that top 20 most popular stocks among hedge funds returned 1.9% in Q2 through May 30th and outperformed the S&P 500 ETF (SPY) by more than 3 percentage points. Unfortunately HZNP wasn’t nearly as popular as these 20 stocks and hedge funds that were betting on HZNP were disappointed as the stock returned -10.3% during the same period and underperformed the market. If you are interested in investing in large cap stocks with huge upside potential, you should check out the top 20 most popular stocks among hedge funds as 13 of these stocks already outperformed the market in Q2.