The Insider Monkey team has completed processing the quarterly 13F filings for the December quarter submitted by the hedge funds and other money managers included in our extensive database. Most hedge fund investors endured a torrid quarter, which certainly propelled them to adjust their equity holdings so as to maintain the desired risk profile. As a result, the relevancy of these public filings and their content is indisputable, as they may reveal numerous high-potential stocks. The following article will discuss the smart money sentiment towards Home Bancshares Inc (NASDAQ:HOMB).

Is Home Bancshares Inc (NASDAQ:HOMB) a splendid investment now? The smart money is taking a bearish view. The number of bullish hedge fund bets went down by 4 in recent months. Our calculations also showed that HOMB isn’t among the 30 most popular stocks among hedge funds.

What does the smart money think about Home Bancshares Inc (NASDAQ:HOMB)?

Heading into the first quarter of 2019, a total of 10 of the hedge funds tracked by Insider Monkey were bullish on this stock, a change of -29% from the previous quarter. Below, you can check out the change in hedge fund sentiment towards HOMB over the last 14 quarters. So, let’s examine which hedge funds were among the top holders of the stock and which hedge funds were making big moves. 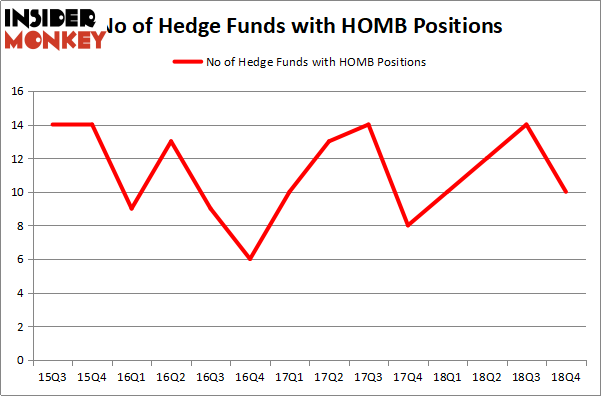 More specifically, Basswood Capital was the largest shareholder of Home Bancshares Inc (NASDAQ:HOMB), with a stake worth $3.8 million reported as of the end of September. Trailing Basswood Capital was Millennium Management, which amassed a stake valued at $3.6 million. Skylands Capital, Renaissance Technologies, and Balyasny Asset Management were also very fond of the stock, giving the stock large weights in their portfolios.

Since Home Bancshares Inc (NASDAQ:HOMB) has faced declining sentiment from the smart money, we can see that there exists a select few fund managers that decided to sell off their entire stakes in the third quarter. Intriguingly, Anton Schutz’s Mendon Capital Advisors said goodbye to the largest position of all the hedgies monitored by Insider Monkey, valued at close to $9.5 million in stock. Cliff Asness’s fund, AQR Capital Management, also dumped its stock, about $1.3 million worth. These transactions are intriguing to say the least, as aggregate hedge fund interest fell by 4 funds in the third quarter.

Let’s check out hedge fund activity in other stocks – not necessarily in the same industry as Home Bancshares Inc (NASDAQ:HOMB) but similarly valued. We will take a look at Perspecta Inc. (NYSE:PRSP), USANA Health Sciences, Inc. (NYSE:USNA), Stamps.com Inc. (NASDAQ:STMP), and LendingTree, Inc (NASDAQ:TREE). This group of stocks’ market valuations are closest to HOMB’s market valuation.

As you can see these stocks had an average of 27.5 hedge funds with bullish positions and the average amount invested in these stocks was $332 million. That figure was $14 million in HOMB’s case. Perspecta Inc. (NYSE:PRSP) is the most popular stock in this table. On the other hand USANA Health Sciences, Inc. (NYSE:USNA) is the least popular one with only 19 bullish hedge fund positions. Compared to these stocks Home Bancshares Inc (NASDAQ:HOMB) is even less popular than USNA. Hedge funds dodged a bullet by taking a bearish stance towards HOMB. Our calculations showed that the top 15 most popular hedge fund stocks returned 24.2% through April 22nd and outperformed the S&P 500 ETF (SPY) by more than 7 percentage points. Unfortunately HOMB wasn’t nearly as popular as these 15 stock (hedge fund sentiment was very bearish); HOMB investors were disappointed as the stock returned 14.4% and underperformed the market. If you are interested in investing in large cap stocks with huge upside potential, you should check out the top 15 most popular stocks) among hedge funds as 13 of these stocks already outperformed the market this year.