While the market driven by short-term sentiment influenced by uncertainty regarding the future of the interest rate environment in the US, declining oil prices and the trade war with China, many smart money investors kept their optimism regarding the current bull run in the fourth quarter, while still hedging many of their long positions. However, as we know, big investors usually buy stocks with strong fundamentals, which is why we believe we can profit from imitating them. In this article, we are going to take a look at the smart money sentiment surrounding Heron Therapeutics Inc (NASDAQ:HRTX).

Heron Therapeutics Inc (NASDAQ:HRTX) investors should pay attention to a decrease in support from the world’s most elite money managers recently. HRTX was in 25 hedge funds’ portfolios at the end of December. There were 31 hedge funds in our database with HRTX holdings at the end of the previous quarter. Our calculations also showed that HRTX isn’t among the 30 most popular stocks among hedge funds.

In the financial world there are a multitude of indicators market participants put to use to appraise publicly traded companies. A duo of the most under-the-radar indicators are hedge fund and insider trading moves. Our researchers have shown that, historically, those who follow the best picks of the top investment managers can outpace their index-focused peers by a healthy margin (see the details here).

What have hedge funds been doing with Heron Therapeutics Inc (NASDAQ:HRTX)?

Heading into the first quarter of 2019, a total of 25 of the hedge funds tracked by Insider Monkey were bullish on this stock, a change of -19% from the previous quarter. Below, you can check out the change in hedge fund sentiment towards HRTX over the last 14 quarters. So, let’s see which hedge funds were among the top holders of the stock and which hedge funds were making big moves. 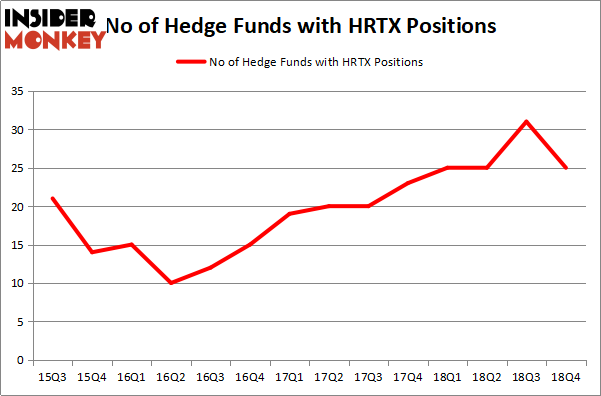 Among these funds, Tang Capital Management held the most valuable stake in Heron Therapeutics Inc (NASDAQ:HRTX), which was worth $150.9 million at the end of December. On the second spot was Baker Bros. Advisors which amassed $130.2 million worth of shares. Moreover, Rubric Capital Management, Citadel Investment Group, and Bridger Management were also bullish on Heron Therapeutics Inc (NASDAQ:HRTX), allocating a large percentage of their portfolios to this stock.

Seeing as Heron Therapeutics Inc (NASDAQ:HRTX) has faced declining sentiment from the smart money, we can see that there is a sect of funds that decided to sell off their positions entirely heading into Q3. Interestingly, Isaac Corre’s Governors Lane cut the biggest position of the 700 funds watched by Insider Monkey, totaling an estimated $6.3 million in stock, and Jim Simons’s Renaissance Technologies was right behind this move, as the fund dumped about $4.2 million worth. These moves are important to note, as aggregate hedge fund interest fell by 6 funds heading into Q3.

Let’s now take a look at hedge fund activity in other stocks – not necessarily in the same industry as Heron Therapeutics Inc (NASDAQ:HRTX) but similarly valued. We will take a look at Glaukos Corporation (NYSE:GKOS), ACADIA Pharmaceuticals Inc. (NASDAQ:ACAD), Globant SA (NYSE:GLOB), and Edgewell Personal Care Company (NYSE:EPC). This group of stocks’ market caps are similar to HRTX’s market cap.

As you can see these stocks had an average of 16 hedge funds with bullish positions and the average amount invested in these stocks was $278 million. That figure was $716 million in HRTX’s case. ACADIA Pharmaceuticals Inc. (NASDAQ:ACAD) is the most popular stock in this table. On the other hand Glaukos Corporation (NYSE:GKOS) is the least popular one with only 11 bullish hedge fund positions. Compared to these stocks Heron Therapeutics Inc (NASDAQ:HRTX) is more popular among hedge funds. Our calculations showed that top 15 most popular stocks) among hedge funds returned 24.2% through April 22nd and outperformed the S&P 500 ETF (SPY) by more than 7 percentage points. Unfortunately HRTX wasn’t nearly as popular as these 15 stock and hedge funds that were betting on HRTX were disappointed as the stock returned -11.3% and underperformed the market. If you are interested in investing in large cap stocks with huge upside potential, you should check out the top 15 most popular stocks) among hedge funds as 13 of these stocks already outperformed the market this year.