Hedge Funds and other institutional investors have just completed filing their 13Fs with the Securities and Exchange Commission, revealing their equity portfolios as of the end of December. At Insider Monkey, we follow nearly 750 active hedge funds and notable investors and by analyzing their 13F filings, we can determine the stocks that they are collectively bullish on. One of their picks is Helen of Troy Limited (NASDAQ:HELE), so let’s take a closer look at the sentiment that surrounds it in the current quarter.

Helen of Troy Limited (NASDAQ:HELE) was in 17 hedge funds’ portfolios at the end of December. HELE has seen an increase in activity from the world’s largest hedge funds of late. There were 12 hedge funds in our database with HELE positions at the end of the previous quarter. Our calculations also showed that hele isn’t among the 30 most popular stocks among hedge funds.

In the eyes of most market participants, hedge funds are seen as underperforming, outdated investment tools of yesteryear. While there are more than 8000 funds in operation at the moment, Our experts hone in on the elite of this group, approximately 750 funds. These investment experts command the majority of all hedge funds’ total asset base, and by tailing their unrivaled picks, Insider Monkey has uncovered various investment strategies that have historically exceeded the broader indices. Insider Monkey’s flagship hedge fund strategy exceeded the S&P 500 index by nearly 5 percentage points a year since its inception in May 2014 through early November 2018. We were able to generate large returns even by identifying short candidates. Our portfolio of short stocks lost 27.5% since February 2017 (through March 12th) even though the market was up nearly 25% during the same period. We just shared a list of 6 short targets in our latest quarterly update and they are already down an average of 6% in less than a month.

How have hedgies been trading Helen of Troy Limited (NASDAQ:HELE)?

Heading into the first quarter of 2019, a total of 17 of the hedge funds tracked by Insider Monkey held long positions in this stock, a change of 42% from the previous quarter. The graph below displays the number of hedge funds with bullish position in HELE over the last 14 quarters. With hedgies’ positions undergoing their usual ebb and flow, there exists a few key hedge fund managers who were upping their holdings considerably (or already accumulated large positions). 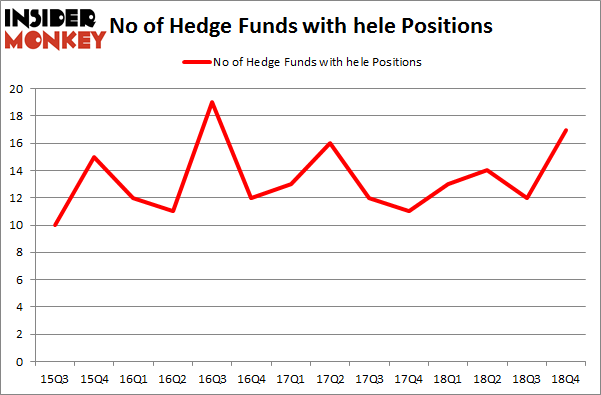 More specifically, Fisher Asset Management was the largest shareholder of Helen of Troy Limited (NASDAQ:HELE), with a stake worth $100.6 million reported as of the end of September. Trailing Fisher Asset Management was Marshall Wace LLP, which amassed a stake valued at $9.8 million. AQR Capital Management, Two Sigma Advisors, and Citadel Investment Group were also very fond of the stock, giving the stock large weights in their portfolios.

Consequently, key hedge funds have jumped into Helen of Troy Limited (NASDAQ:HELE) headfirst. Columbus Circle Investors, managed by Principal Global Investors, established the biggest position in Helen of Troy Limited (NASDAQ:HELE). Columbus Circle Investors had $2.2 million invested in the company at the end of the quarter. Peter Rathjens, Bruce Clarke and John Campbell’s Arrowstreet Capital also made a $1.8 million investment in the stock during the quarter. The other funds with new positions in the stock are Lee Ainslie’s Maverick Capital, Brandon Haley’s Holocene Advisors, and David Harding’s Winton Capital Management.

Let’s go over hedge fund activity in other stocks – not necessarily in the same industry as Helen of Troy Limited (NASDAQ:HELE) but similarly valued. We will take a look at Mattel, Inc. (NASDAQ:MAT), Emcor Group Inc (NYSE:EME), Ryman Hospitality Properties, Inc. (NYSE:RHP), and Penske Automotive Group, Inc. (NYSE:PAG). All of these stocks’ market caps are closest to HELE’s market cap.

As you can see these stocks had an average of 18.5 hedge funds with bullish positions and the average amount invested in these stocks was $311 million. That figure was $134 million in HELE’s case. Penske Automotive Group, Inc. (NYSE:PAG) is the most popular stock in this table. On the other hand Mattel, Inc. (NASDAQ:MAT) is the least popular one with only 15 bullish hedge fund positions. Helen of Troy Limited (NASDAQ:HELE) is not the least popular stock in this group but hedge fund interest is still below average. This is a slightly negative signal and we’d rather spend our time researching stocks that hedge funds are piling on. Our calculations showed that top 15 most popular stocks) among hedge funds returned 24.2% through April 22nd and outperformed the S&P 500 ETF (SPY) by more than 7 percentage points. Unfortunately HELE wasn’t nearly as popular as these 15 stock (hedge fund sentiment was quite bearish); HELE investors were disappointed as the stock returned -13.4% and underperformed the market. If you are interested in investing in large cap stocks with huge upside potential, you should check out the top 15 most popular stocks) among hedge funds as 13 of these stocks already outperformed the market this year.