A whopping number of 13F filings filed with U.S. Securities and Exchange Commission has been processed by Insider Monkey so that individual investors can look at the overall hedge fund sentiment towards the stocks included in their watchlists. These freshly-submitted public filings disclose money managers’ equity positions as of the end of the three-month period that ended March 31, so let’s proceed with the discussion of the hedge fund sentiment on Heidrick & Struggles International, Inc. (NASDAQ:HSII).

Is Heidrick & Struggles International, Inc. (NASDAQ:HSII) a buy, sell, or hold? Investors who are in the know are taking a bearish view. The number of bullish hedge fund positions retreated by 4 lately. Our calculations also showed that HSII isn’t among the 30 most popular stocks among hedge funds.

At the end of the first quarter, a total of 18 of the hedge funds tracked by Insider Monkey held long positions in this stock, a change of -18% from the previous quarter. Below, you can check out the change in hedge fund sentiment towards HSII over the last 15 quarters. So, let’s find out which hedge funds were among the top holders of the stock and which hedge funds were making big moves. 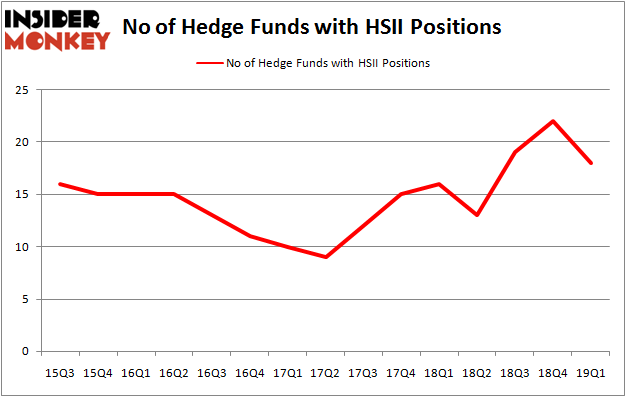 According to Insider Monkey’s hedge fund database, Renaissance Technologies, managed by Jim Simons, holds the number one position in Heidrick & Struggles International, Inc. (NASDAQ:HSII). Renaissance Technologies has a $44.6 million position in the stock, comprising less than 0.1%% of its 13F portfolio. The second most bullish fund manager is Royce & Associates, led by Chuck Royce, holding a $22.4 million position; 0.2% of its 13F portfolio is allocated to the stock. Some other professional money managers with similar optimism include Noam Gottesman’s GLG Partners, Paul Marshall and Ian Wace’s Marshall Wace LLP and D. E. Shaw’s D E Shaw.

Since Heidrick & Struggles International, Inc. (NASDAQ:HSII) has faced falling interest from the smart money, it’s easy to see that there were a few funds who were dropping their positions entirely by the end of the third quarter. Intriguingly, David Harding’s Winton Capital Management dropped the largest stake of all the hedgies tracked by Insider Monkey, comprising an estimated $4.9 million in call options. Matthew Hulsizer’s fund, PEAK6 Capital Management, also dumped its call options, about $0.4 million worth. These moves are important to note, as total hedge fund interest dropped by 4 funds by the end of the third quarter.

As you can see these stocks had an average of 20.25 hedge funds with bullish positions and the average amount invested in these stocks was $156 million. That figure was $132 million in HSII’s case. Dermira Inc (NASDAQ:DERM) is the most popular stock in this table. On the other hand Century Communities, Inc (NYSE:CCS) is the least popular one with only 16 bullish hedge fund positions. Heidrick & Struggles International, Inc. (NASDAQ:HSII) is not the least popular stock in this group but hedge fund interest is still below average. This is a slightly negative signal and we’d rather spend our time researching stocks that hedge funds are piling on. Our calculations showed that top 20 most popular stocks among hedge funds returned 1.9% in Q2 through May 30th and outperformed the S&P 500 ETF (SPY) by more than 3 percentage points. Unfortunately HSII wasn’t nearly as popular as these 20 stocks (hedge fund sentiment was quite bearish); HSII investors were disappointed as the stock returned -18.4% during the same time period and underperformed the market. If you are interested in investing in large cap stocks with huge upside potential, you should check out the top 20 most popular stocks among hedge funds as 13 of these stocks already outperformed the market so far in Q2.