Hedge Funds Have Never Been This Bullish On Heidrick & Struggles International, Inc. (HSII)

Is Heidrick & Struggles International, Inc. (NASDAQ:HSII) a good stock to buy right now? We at Insider Monkey like to examine what billionaires and hedge funds think of a company before doing days of research on it. Given their 2 and 20 payment structure, hedge funds have more incentives and resources than the average investor. The funds have access to expert networks and get tips from industry insiders. They also have numerous Ivy League graduates and MBAs. Like everyone else, hedge funds perform miserably at times, but their consensus picks have historically outperformed the market after risk adjustments.

Heidrick & Struggles International, Inc. (NASDAQ:HSII) shareholders have witnessed an increase in hedge fund sentiment in recent months. Our calculations also showed that HSII isn’t among the 30 most popular stocks among hedge funds.

What have hedge funds been doing with Heidrick & Struggles International, Inc. (NASDAQ:HSII)?

At the end of the fourth quarter, a total of 22 of the hedge funds tracked by Insider Monkey were long this stock, a change of 16% from one quarter earlier. Below, you can check out the change in hedge fund sentiment towards HSII over the last 14 quarters. So, let’s find out which hedge funds were among the top holders of the stock and which hedge funds were making big moves. 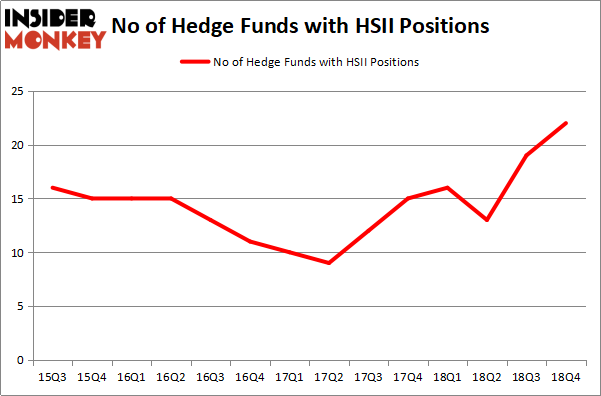 The largest stake in Heidrick & Struggles International, Inc. (NASDAQ:HSII) was held by Renaissance Technologies, which reported holding $34.7 million worth of stock at the end of December. It was followed by Royce & Associates with a $20.5 million position. Other investors bullish on the company included GLG Partners, Marshall Wace LLP, and D E Shaw.

As one would reasonably expect, some big names have been driving this bullishness. Marshall Wace LLP, managed by Paul Marshall and Ian Wace, established the largest position in Heidrick & Struggles International, Inc. (NASDAQ:HSII). Marshall Wace LLP had $6.3 million invested in the company at the end of the quarter. Hoon Kim’s Quantinno Capital also initiated a $0.4 million position during the quarter. The other funds with new positions in the stock are Minhua Zhang’s Weld Capital Management and Matthew Hulsizer’s PEAK6 Capital Management.

As you can see these stocks had an average of 14.25 hedge funds with bullish positions and the average amount invested in these stocks was $118 million. That figure was $105 million in HSII’s case. Ra Pharmaceuticals, Inc. (NASDAQ:RARX) is the most popular stock in this table. On the other hand Exela Technologies, Inc. (NASDAQ:XELA) is the least popular one with only 13 bullish hedge fund positions. Compared to these stocks Heidrick & Struggles International, Inc. (NASDAQ:HSII) is more popular among hedge funds. Our calculations showed that top 15 most popular stocks) among hedge funds returned 24.2% through April 22nd and outperformed the S&P 500 ETF (SPY) by more than 7 percentage points. Hedge funds were also right about betting on HSII as the stock returned 26.5% and outperformed the market by an even larger margin. Hedge funds were clearly right about piling into this stock relative to other stocks with similar market capitalizations.