Is Healthequity Inc (NASDAQ:HQY) a good equity to bet on right now? We like to check what the smart money thinks first before doing extensive research. Although there have been several high profile failed hedge fund picks, the consensus picks among hedge fund investors have historically outperformed the market after adjusting for known risk attributes. It’s not surprising given that hedge funds have access to better information and more resources to find the winners in the stock market.

Is Healthequity Inc (NASDAQ:HQY) ready to rally soon? Prominent investors are taking an optimistic view. The number of long hedge fund positions moved up by 3 recently. Our calculations also showed that HQY isn’t among the 30 most popular stocks among hedge funds.

What does the smart money think about Healthequity Inc (NASDAQ:HQY)? 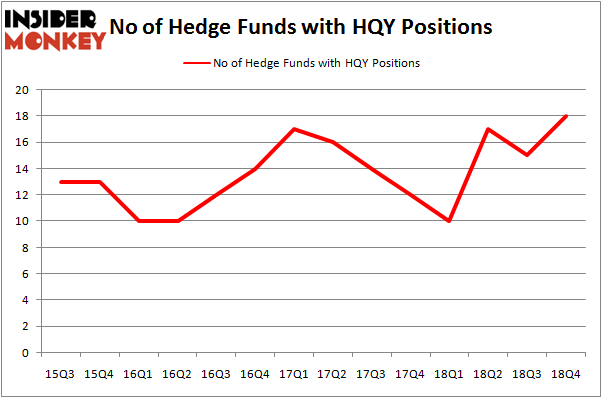 More specifically, Renaissance Technologies was the largest shareholder of Healthequity Inc (NASDAQ:HQY), with a stake worth $39.1 million reported as of the end of September. Trailing Renaissance Technologies was Millennium Management, which amassed a stake valued at $10.1 million. Citadel Investment Group, Royce & Associates, and PEAK6 Capital Management were also very fond of the stock, giving the stock large weights in their portfolios.

As one would reasonably expect, key money managers have jumped into Healthequity Inc (NASDAQ:HQY) headfirst. Diker Management, managed by Mark N. Diker, assembled the largest position in Healthequity Inc (NASDAQ:HQY). Diker Management had $1.2 million invested in the company at the end of the quarter. Matthew Hulsizer’s PEAK6 Capital Management also made a $1.2 million investment in the stock during the quarter. The other funds with brand new HQY positions are Paul Tudor Jones’s Tudor Investment Corp, Dmitry Balyasny’s Balyasny Asset Management, and George Zweig, Shane Haas and Ravi Chander’s Signition LP.

As you can see these stocks had an average of 20.25 hedge funds with bullish positions and the average amount invested in these stocks was $494 million. That figure was $65 million in HQY’s case. The New York Times Company (NYSE:NYT) is the most popular stock in this table. On the other hand Pebblebrook Hotel Trust (NYSE:PEB) is the least popular one with only 12 bullish hedge fund positions. Healthequity Inc (NASDAQ:HQY) is not the least popular stock in this group but hedge fund interest is still below average. This is a slightly negative signal and we’d rather spend our time researching stocks that hedge funds are piling on. Our calculations showed that top 15 most popular stocks) among hedge funds returned 24.2% through April 22nd and outperformed the S&P 500 ETF (SPY) by more than 7 percentage points. Unfortunately HQY wasn’t nearly as popular as these 15 stock (hedge fund sentiment was quite bearish); HQY investors were disappointed as the stock returned 10.8% and underperformed the market. If you are interested in investing in large cap stocks with huge upside potential, you should check out the top 15 most popular stocks) among hedge funds as 13 of these stocks already outperformed the market this year.