Many investors, including Paul Tudor Jones or Stan Druckenmiller, have been saying before the Q4 market crash that the stock market is overvalued due to a low interest rate environment that leads to companies swapping their equity for debt and focusing mostly on short-term performance such as beating the quarterly earnings estimates. In the fourth quarter, many investors lost money due to unpredictable events such as the sudden increase in long-term interest rates and unintended consequences of the trade war with China. Nevertheless, many of the stocks that tanked in the fourth quarter still sport strong fundamentals and their decline was more related to the general market sentiment rather than their individual performance and hedge funds kept their bullish stance. In this article we will find out how hedge fund sentiment to Health Insurance Innovations Inc (NASDAQ:HIIQ) changed recently.

Is Health Insurance Innovations Inc (NASDAQ:HIIQ) a good stock to buy now? The smart money is in an optimistic mood. The number of bullish hedge fund positions increased by 1 in recent months. Our calculations also showed that HIIQ isn’t among the 30 most popular stocks among hedge funds.

How have hedgies been trading Health Insurance Innovations Inc (NASDAQ:HIIQ)? 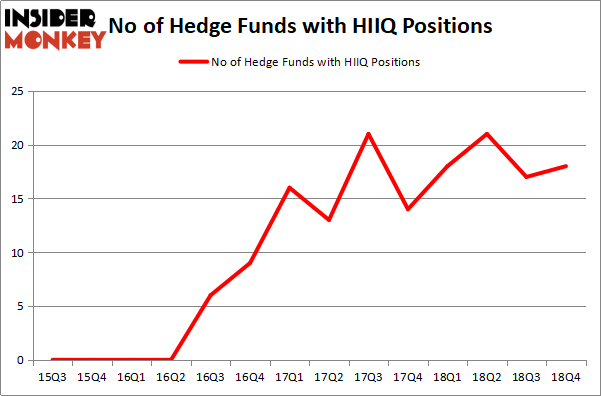 More specifically, Harvest Capital Strategies was the largest shareholder of Health Insurance Innovations Inc (NASDAQ:HIIQ), with a stake worth $25.4 million reported as of the end of December. Trailing Harvest Capital Strategies was P2 Capital Partners, which amassed a stake valued at $22.2 million. Cannell Capital, Renaissance Technologies, and Cardinal Capital were also very fond of the stock, giving the stock large weights in their portfolios.