Is H&E Equipment Services, Inc. (NASDAQ:HEES) a first-rate investment right now? The smart money is in a bullish mood. The number of long hedge fund bets rose by 2 lately. Our calculations also showed that HEES isn’t among the 30 most popular stocks among hedge funds.

What does the smart money think about H&E Equipment Services, Inc. (NASDAQ:HEES)? 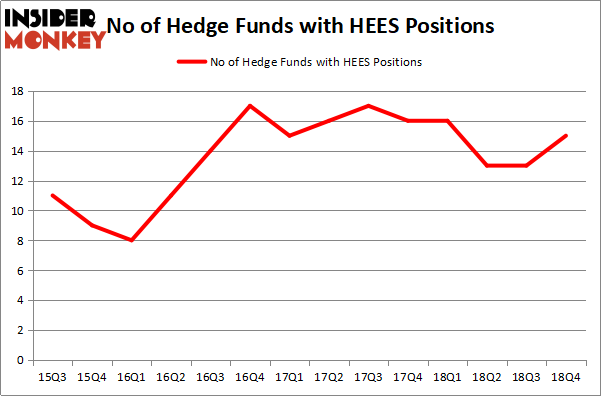 The largest stake in H&E Equipment Services, Inc. (NASDAQ:HEES) was held by Marshall Wace LLP, which reported holding $9.7 million worth of stock at the end of December. It was followed by Buckingham Capital Management with a $7.2 million position. Other investors bullish on the company included Citadel Investment Group, SG Capital Management, and Two Sigma Advisors.

Consequently, specific money managers have been driving this bullishness. Marshall Wace LLP, managed by Paul Marshall and Ian Wace, initiated the most valuable position in H&E Equipment Services, Inc. (NASDAQ:HEES). Marshall Wace LLP had $9.7 million invested in the company at the end of the quarter. David Keidan’s Buckingham Capital Management also made a $7.2 million investment in the stock during the quarter. The following funds were also among the new HEES investors: Phill Gross and Robert Atchinson’s Adage Capital Management, Mike Vranos’s Ellington, and Matthew Hulsizer’s PEAK6 Capital Management.

As you can see these stocks had an average of 13.25 hedge funds with bullish positions and the average amount invested in these stocks was $77 million. That figure was $37 million in HEES’s case. Malibu Boats Inc (NASDAQ:MBUU) is the most popular stock in this table. On the other hand Ehi Car Services Ltd (NYSE:EHIC) is the least popular one with only 6 bullish hedge fund positions. H&E Equipment Services, Inc. (NASDAQ:HEES) is not the most popular stock in this group but hedge fund interest is still above average. Our calculations showed that top 15 most popular stocks) among hedge funds returned 24.2% through April 22nd and outperformed the S&P 500 ETF (SPY) by more than 7 percentage points. Hedge funds were also right about betting on HEES as the stock returned 45.4% and outperformed the market by an even larger margin. Hedge funds were rewarded for their relative bullishness.